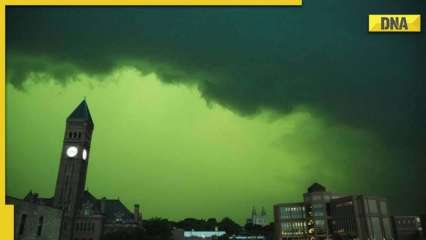 In an unusual weather event on Tuesday, the states of Nebraska, Minnesota and Illinois in the United States were hit by a storm system called derecho. Tuesday’s derecho produced a swath of damage more than 600 miles long from northwestern South Dakota to northern Iowa. Winds blowing at around 140 km/h snapped power lines and toppled trees.

When the storm hit, it turned the sky green. Footage has been shared on social media showing how surreal this natural phenomenon was. The storm not only left behind heavy rainfall, hail and wind, but also threatening green skies that amazed locals.

Read | An unusual weather phenomenon has turned sky green in South Dakota in the United States, resembling a scene from a sci-fi movie

About 30,000 homes and businesses were without power in South Dakota. It was the second time South Dakota had been hit by a derecho in less than two months. Heavy rains also lead to local flash floods in some places. So what is a derecho, let’s find out here.

What is a derecho?

Derechos are rare storms that can be just as powerful and destructive as hurricanes or tornadoes. They are mostly seen in late spring and summer in the central and eastern United States. The Derechos produce walls of strong wind that criss-cross the landscape, leaving hundreds of miles of damage in their wake.

The name Derecho comes from the Spanish word “la derecha” which means straight. In straight-line storm winds, there is no rotation unlike a tornado. These storms travel hundreds of miles and cover a wide area. Derecho is a hot weather phenomenon and usually occurs during the summer.

Only storms are classified as derecho that have wind gusts of at least 93 km per hour and a wind damage band extending over 400 km. According to the University of Oklahama School of Meteorology, the time interval between successive wind damage events should not exceed three hours.

Why did the sky turn green?

The derechos give green skies due to the interaction of light with the huge amount of water they contain. A Washington Post report suggests that large raindrops and hail scatter all but blue wavelengths due to which predominantly blue light penetrates beneath the thundercloud.

This blue then combines with the red and yellow of the afternoon or evening sun to produce green, according to the report. Derechos fall into three categories – progressive, serial and hybrid.