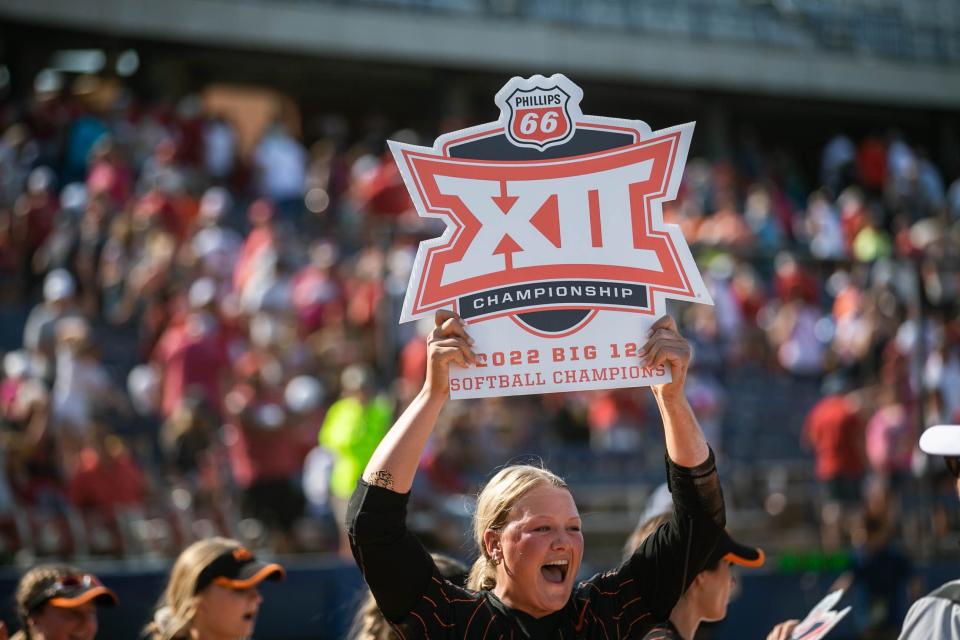 But in the biggest batting game of Oklahoma State’s senior season so far, the best thing she’s done hasn’t been swinging.

With two outs in the top of the eighth inning against rival Oklahoma, Naomi drew a four-pitch walk from Nicole May and the Cowgirl defense took the lead for a 4-3 victory over the best Sooners for the Big 12 Title tournament Saturday at the USA Softball Hall of Fame Stadium.

It is the Cowgirls’ first Big 12 softball tournament title and the first conference tournament crown of any kind since winning the Big 8 tournament in 1995.

Naomi had just two hits in her previous 19 appearances, and OSU coach Kenny Gajewski had a hit for her earlier in the game. But the veteran who has been through countless tense situations over the past four years has still earned the confidence of her team.

“I felt good,” Gajewski said. “The beautiful thing about these kids, even when I hit them… it’s just cool that they don’t get mad. I know they’re upset, but they don’t show it. Kiley didn’t show it.

“She had better batting. She walked. She went further in the accounts. So she gets there. »

Naomi’s bat never left her shoulder and she celebrated her walk with as much enthusiasm as she would have hit a home run, throwing the bat and rushing to first base in front of the dugout of her team.

“I thought she was going to have a hit,” said senior center fielder Chyenne Factor. “She takes a lot of walks, for me. I wasn’t worried at all. It was big.

Naomi’s pitch error late in the eighth inning gave OU hope, but on the next play – another pitch in its own way – the pitch was on target, sparking a wild celebration on the very pitch where OSU hopes to play in the women’s. College World Series in three weeks.

OSU pitchers Kelly Maxwell and Morgan Day combined to hold the Sooners to three runs on seven hits, with Day — the tournament’s most outstanding player — picking up the win for her second straight game. She went the distance in Friday’s 6-1 win over Texas, then allowed a run on three hitless walks and three strikeouts in five innings against the powerhouse Sooners.

After: Patty Gasso’s reaction to OU softball’s Big 12 tournament loss? The Sooners “leave with a lot of value”

Defensive mistakes cost the Cowgirls dearly in last weekend’s Bedlam Series and they did it again on Saturday.

OU entered the board in the third with Tiare Jennings driving in a run with a single.

Two batters later, Grace Lyons skied a two-out popup into the infield and OSU second baseman Brianna Evans fought off the sun. Evans couldn’t get the ball back and Tiare Jennings came home to score to give the Sooners a 2-0 lead.

The Cowgirls tied it in the fourth, however, as OU starter Nicole May struggled to control, walking two before Hayley Busby’s RBI single chased May out of the game.

After Hope Trautwein came on, Taylor Tuck tied the game with a sacrifice ball on the left.

The Cowgirls took the lead in the fifth as Chelsea Alexander raced home to score after Chyenne Factor was caught in a preview between first and second after Factor’s bunt single.

Factor was eventually knocked out, but Alexander came home to score without play.

In the bottom half of the inning, Jocelyn Alo smashed the first pitch she saw over the left field wall for a solo home run to tie it.

Gajewski has preached to his team for much of the season that they are chasers, chasing after what Oklahoma has won over the past few years. And Saturday’s victory in front of more than 5,400 fans in the softball capital of the world was significant.

“We try to emulate them in a lot of things we do,” Gajewksi said of the Sooners. “It’s the norm. I am watching him. I see him. We show our team, like, this is what it looks like, so do it. You are just as good.

“We are just as good. We are equally talented. We just have to play like that, and we did that here today.

Frame: What will the future of Big 12 softball look like after OU and Texas flee to the SEC?