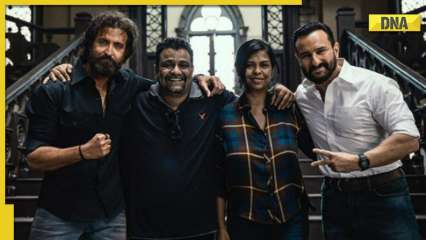 Husband and wife filmmakers Pushkar and Gayatri are on cloud nine as their debut web series Suzhal: The Vortex, a cutting-edge siege crime thriller set in the fictional town of Sambaloor, is highly praised by audiences, critics and celebrities for its gripping story, well-etched characters, brilliant cinematography and sensational music.

The directors are set to make their Bollywood debut by remaking their own Tamil blockbuster Vikram Vedha, which starred R. Madhavan and Vijay Sethupathi in the lead roles. In the Hindi version which will be released on September 30, Saif Ali Khan and Hrithik Roshan portray the central characters of Vikram and Vedha respectively.

In a freewheeling conversation with TAUT, Pushkar and Gayatri talked about the current trend of remakes in Bollywood and the crossover of talent within Indian film industries.

“I think the step forward is what happened with Suzhal. It’s a Tamil language original and it started as being Amazon’s first scripted original in Tamil. After seeing the show in Tamil , everyone at Amazon was really really excited and said ‘we’re going to release it in all languages ​​in India’ and then a few weeks later they said ‘hey we’re going to release it in a whole bunch of countries and it will be dubbed in foreign languages. So, I think the way forward is that we have to be language independent,” Pushkar said.

He continued: “We still strongly believe in rooting the story in a time, a space and a language. But how people see it will be what suits them best. We are very used to seeing a movie in another language with subtitles, but not If you grew up reading subtitles you will be very comfortable with it, while my mother is happier to see a dubbed version of a movie Hindi.

Emphasizing that Indian audiences should now start consuming Indian content, Pushkar added, “So I think the way forward is to understand that content will work. Movies or web series that connect with human emotions will work in any language. It’s just that all the while we’re consuming content from all over the world, it’s time for India to start consuming content from other territories, and for the rest of the world to start watching Indian content that is at that level.”

Speaking about the North versus South cinema debate, Pushkar told TAUT, “I don’t think it’s a storyline for one to survive, the other to die. I think with the kind of viewers we We have, there is so much space for films of any language across India. It’s not like one film does well, another film will have to fail for the first one to succeed.

Gayatri chimed in and said, “Well, the story has to work regardless of the language. One thing we’re proud of is that most other industries like Europe, including the French, the German, the Italian – all of those film industries have taken over and Hollywood has actually taken over, and we’re still able to have a robust industry on its own in all languages ​​and in so many cultures.

When the director duo were asked about the crossover of talents within Indian film industries, Pushkar told TAUT: “It was about time that all of this started happening. Every industry is insular and there are many reasons why. why they’ve been that way with the idea of ​​protecting the market and making sure the local industry grows and all that But now with all the exposure that streaming platforms give like Amazon Prime Video has movies from Telugu, Malayalam, Hindi, Kannada, Tamil, Bengali all on one platform and people are watching it all.”

“There have been a bunch of Tamil movies that have done extremely well on Amazon Prime Video. Now that audiences have started seeing stuff from everywhere, people from all over the country are also going to start working everywhere. I see a brilliant stunt sequence in a bengali film i want to know who this stuntman is call him and make him work on a film and that’s because now the access is there the opening of the viewing experience is basically what’s getting things done.” Pushkar concluded.