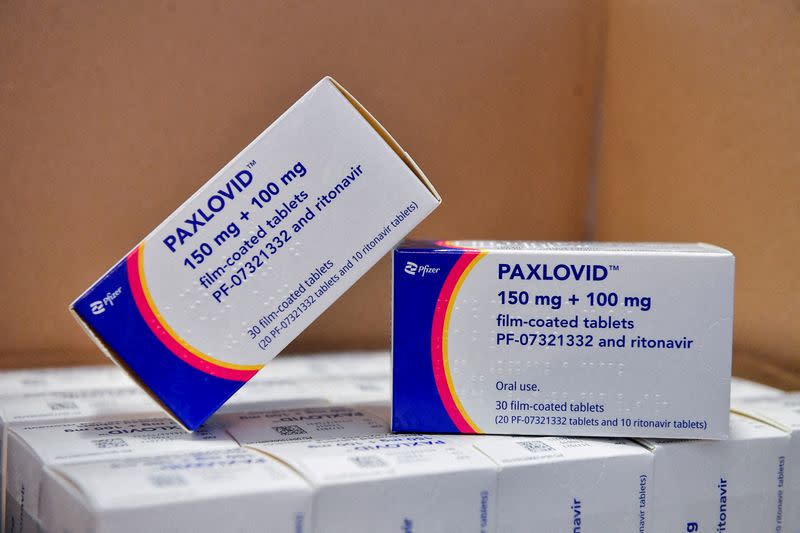 (Reuters) – Use of Pfizer Inc’s COVID-19 antiviral Paxlovid has increased this week, but some doctors are reconsidering the pills for low-risk patients after a U.S. public health agency warned symptoms may reappear after people have completed a course of the drug, and then should isolate a second time.

More quarantine time “is no crowd pleaser,” Dr. Sandra Kemmerly, infectious disease specialist at Ochsner Health in New Orleans, told Reuters. “For people who are really not at risk…I would recommend that they don’t take it.”

Use of Pfizer’s Paxlovid, licensed to treat newly infected at-risk people to prevent serious illness, soared as infections increased. More than 162,000 classes were given last week – compared to an average of 33,000 a week since the drug was launched late last year, according to government data. Biden administration officials have pushed for widespread use of Paxlovid, which the government purchased and provides for free.

But higher usage has also come with more reports of people saying their symptoms eased with Paxlovid only to return a few days after completing a five-day regimen of the pills.

On Tuesday, the Centers for Disease Control and Prevention, citing case reports and concerns that relapsed patients could spread the virus, issued an advisory that Paxlovid users should self-isolate for an additional five days if symptoms recur. .

“I’m hesitant to give it to people who are at very low risk and who aren’t very sick, especially vaccinated and boosted people,” said Dr. Bruce Farber, head of public health and epidemiology for Northwell Health. . He said he always recommends Paxlovid to people who have significant health conditions or are over 75.

Pfizer, in an email, said it was monitoring the data, but believes the return of a detectable virus is rare and not solely associated with its drug. “We have not seen any resistance emerge to date in patients treated with Paxlovid,” a spokesperson said.

Paxlovid’s emergency authorization says it should only be used for newly infected people with risk factors, but doctors said many other people had asked for prescriptions.

“We get a lot of requests — maybe someone is traveling and wants to take it just in case,” said Dr. Tara Vijayan, an infectious disease specialist at UCLA Health in Los Angeles. “We don’t offer it just in case.”

The CDC also said it was unclear if the cases of rebound symptoms had something to do with Paxlovid, or were simply part of the natural trajectory of COVID-19. The agency did not report any specific concerns about health effects.

“COVID has historically had this kind of course with stuttering – people will feel better one day and then feel worse the next day, but I can say we haven’t seen these rebound symptoms with other COVID treatments. “said Vijayan, referring to therapies such as monoclonal antibodies.

Some wonder how much Paxlovid helps given the high number of people vaccinated or previously infected with COVID-19. The drug was authorized in December after a study in high-risk unvaccinated COVID patients with conditions like diabetes showed an 88% reduction in hospitalizations or deaths.

At the time, the Delta variant was prevalent, but has since been replaced by the more transmissible Omicron.

“There’s so much more baseline immunity. There’s still a lot of infections, but they’re not as bad,” Northwell’s Farber said.

He estimated the rate of Paxlovid-related COVID rebounds at around 10%, higher than the 3-4% rate cited by Pfizer in its trials of the drug.

Jason Gallagher, an infectious disease expert at Temple University School of Pharmacy, said the rebounds didn’t detract from the drug’s usefulness. “It keeps you from going to the hospital…if you get symptomatic after you stop taking it, it stinks, but overall the drug was a success,” he said.