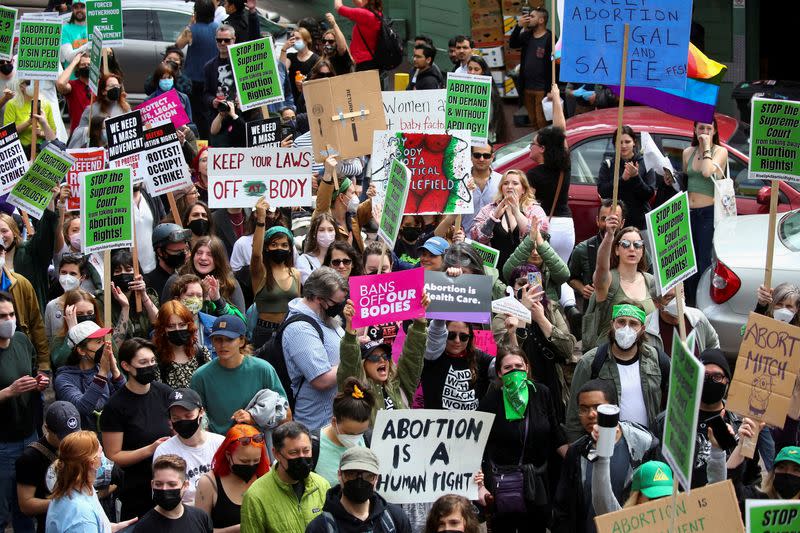 WASHINGTON (Reuters) – Frustration with President Joe Biden and his Democratic Party over their perceived lack of leadership on abortion rights is likely to fuel months of planned protests across the country, officials said. activists.

An unprecedented Supreme Court leak two weeks ago showed that the conservative majority of justices could soon overturn the landmark Roe v. Wade in 1973 which established the right to abortion. Galvanized by the prospect, protesters marched across the country on Saturday, the start of what organizers said was a “summer of rage”.

Since the Supreme Court leak, the Biden administration and Democrats have not offered a meaningful plan to deal with such a decision, critics said. They urged Biden to take a more active and vocal role in a national response to the potential decision.

“I’d like to see the White House say, ‘We’re having an emergency summit with every Democrat in this country because we’re going to pass a federal law that guarantees abortion rights,'” said author Mona Eltahawy. and advocate for women’s rights.

“I am amazed at the lack of urgency, in general, whether from the Biden White House or Democrats as a whole,” she said.

Biden, a devout Catholic who has said he is personally against abortion but respects a woman’s right to choose one, has been a reluctant ally on the issue, some activists believe, noting he talks about it rarely publicly.

The disappointment is compounded by a sense that Democrats have had plenty of time to prepare. Conservatives have been open about their goal of a total abortion ban for decades, and women’s rights groups have sounded the alarm about the consequences of a conservative majority on the Supreme Court for years. .

“Their constant solution is, ‘Well, just vote in November. I can’t tell you enough how offensive it is to ask them to hope…that they win in November, take office in January and eventually find a solution,” Renee said. Bracey Sherman of We Testify, an organization that promotes open discussion about abortion.

In the United States, women have transitioned to the Democratic Party in recent decades. According to Pew Research, some 56% of registered female voters identified as Democrats or Democratic-leaning in the 2018 and 2019 polls, up from 48% in 1994.

Democratic women polled last year by Reuters and Ipsos said abortion rights were the issue they would be most angry about if the government went against their views. About 60% of Americans overall say abortions should be legal in some or all cases.

The Supreme Court’s threat to restrict access to abortion despite popular opposition and the importance of the topic to female voters illustrates how ineffectual Democrats are, critics, including some elected officials, have said.

“Where is the Democratic Party?” California Governor Gavin Newsom asked in the days following the May 2 leak. “Why don’t we stand up stronger, more resolute? Why don’t we call it that? It’s a coordinated, concerted effort (of the Republicans). And yes, they are winning.”

A Democratic bill to guarantee abortion rights failed in the Senate this week. There is little hope that such a law will pass next year either, political strategists said, unless Democrats control 60 Senate seats after the November election, a long shot, or that Biden is prepared to seek an end to a procedural norm in Congress known as the filibuster. This prevents them from passing a bill by a simple majority.

The White House has already ruled out what some women’s rights advocates have touted as a last-ditch option, expanding the Supreme Court to balance the conservative majority of justices.

SURPRISE IN THE WHITE HOUSE

Officials across the Biden administration were taken aback by the harsh wording of the court’s draft decision, several told Reuters. Some had hoped the Supreme Court would not completely overturn Roe v. Wade, but the project left no doubt of the intention.

Inside the White House, the feeling prevailed that little could be done to overcome Democratic Sen. Joe Manchin’s core opposition to ending the filibuster, officials said.

Biden’s Gender Policy Council, an advisory body on gender equality, is trying to push the president to act, outside groups and people involved in the meetings said.

Biden is weighing ideas including expanding access to medical abortion drugs to increase funding for low-income women who must travel for abortions.

However, “there is no clear, workable, winnable plan on the table” on how to protect abortion rights nationwide, a White House adviser said on the matter.

Factbox-Shanghai provides a roadmap to exit from containment