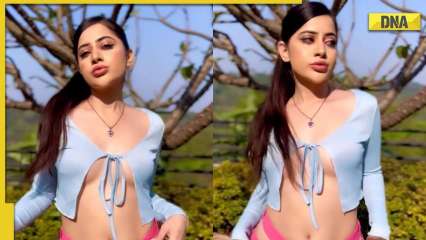 What makes Urfi Javed popular? Apart from her unique fashion statements, she is known for speaking without a filter. She is frankly honest and she does not hesitate to share her own little secrets. Recently, Urfi was spotted on a rainy day in Mumbai, and she was snapped by photographers.

During a quick chat with Instant Bollywood, the actress shared her take on the Mumbai rains. The journalist asked her if she was a fan of the monsoon? Urfi revealed a fact about herself saying, “Mujhe toh nahana bhi pasand nahi hai…bhegne ki toh door ki baat hai.” The actress was then asked if she feels lazy in the monsoon, and Urfi added, “Main bahut lazy hoon, it’s not just about the monsoon. mujhe roz alas aata hai.”

Here is the video

Previously, Javed reacted to her death rumors, she criticized people for spreading such news about her. The actress was shocked after seeing a transformed image shared by a social media user with the caption ‘RIP Urfi Javed’. In addition to the photo, he wrote: “1997-2022”, a comment read: “Stand by the murderer of Urfi”. When Urfi saw the message, she reacted and wrote: “What is going on in this world? I get so many death threats and now this! The comment says they support my killer! Mad.”

See also  Daniel Kaluuya is not interested in being the next James Bond, but he would play a villain