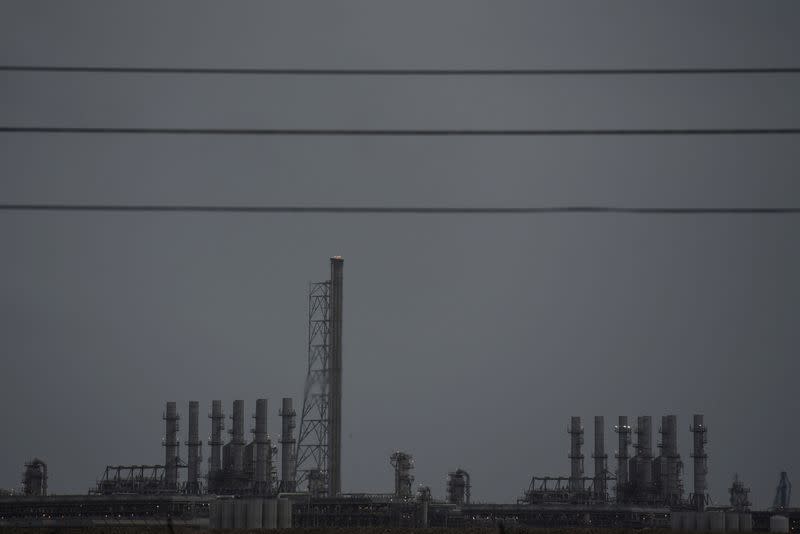 By Nichola Groom and Valérie Volcovici

PORTLAND, Texas (Reuters) – Cheniere, the largest U.S. exporter of liquefied natural gas, boasts it is helping “improve local air quality in communities around the world” as the cleaner fuel it ships replaces coal in power plants.

But in the Corpus Christi, Texas area, where fuel is prepared for shipment, the company is worsening the air quality — with the consent of state regulators.

The massive Cheniere LNG plant, on the outskirts of the Gulf Coast town, exceeded its allowable limits for emissions of pollutants such as soot, carbon monoxide and volatile organic compounds (VOCs) by hundreds times since it started in 2018, according to a Reuters review of regulatory filings.

Instead of imposing penalties for such violations, the Texas Commission on Environmental Quality (TCEQ) responded by granting Cheniere steep increases in the plant’s pollution limits, the documents show. The facility is now allowed to emit some 353 tonnes of VOCs per year, double the limit set in its original permit eight years ago. The state raised limits for four other pollutants by more than 40 percent.

The issue has infuriated nearby residents who cite the frequency of large flares, used to burn excess gas to relieve pressure, and evidence that local air quality has deteriorated significantly since the start of the facility. They called on the state to crack down on pollution from the plant rather than allow it to emit more.

Texas regulators have acknowledged the plant’s impact on local air quality: In its annual law enforcement report for fiscal year 2019, the agency blamed the 83% increase emissions from the Corpus Christi area compared to the previous year in part at the start-up of the Cheniere facility.

Cheniere said in a statement to Reuters that it initially underestimated the plant’s emissions because it was required to apply for the initial permit before its engineering work was complete. The company said its design and equipment meet federal standards requiring the “best available control technology” to limit pollution.

See also  At Summit of the Americas, Biden pledges US help on Latin American issues

When actual emissions exceeded those estimates, Cheniere sought amendments from regulators to “reconcile” the higher pollution with its original assumptions, the company said.

The plant would not be able to operate consistently and efficiently within the lower pollution limits, which would require frequent shutdowns, plant general manager Ari Aziz said in an interview.

Emissions from the Corpus Christi LNG facility at Cheniere highlight a broader danger of increased air pollution as the United States and other countries seek to increase exports of American gas. LNG facilities are significant polluters, and regulation will be essential to ensure that their emissions do not pose major health concerns for residents near the plants.

US President Joe Biden’s administration sees the expansion of the LNG industry as a key tool to help Europe reduce its energy dependence on Russia, which has been aggressively sanctioned by Western countries since the invasion of Ukraine in February. The LNG expansion policy, however, could undermine the administration’s promises to fight climate change and provide cleaner air to communities living near industrial sites.

Biden’s energy department said in a statement to Reuters that expanding LNG to address global energy shortages “must be balanced” with the environmental impacts of fossil fuels. The administration said it supports research into technologies that will mitigate those impacts “in a fair and sustainable way,” without specifying any particular technology.

LNG export capacity in the United States is on track to grow by 40% over the next two years, according to the Department of Energy, with companies such as Cheniere, Freeport LNG and Sempra LNG considering new projects and great expansions.

“They tell us that we have to export more, we have to help our friends in Europe. But what about us? said Elida Castillo, director of Chispa Texas, an organization representing low-income, mostly Hispanic communities in Gregory and Taft near the terminal. “We are the ones who suffer from all the pollution.”

INFRACTIONS, BUT NO PENALTIES

In July last year, the TCEQ opened a law enforcement investigation into the Corpus Christi facility following 293 cases in 2020 where emissions from the plant exceeded allowable limits. The excess pollution resulted in 19 violations that the agency investigated for possible enforcement. All were resolved without penalties to the company.

The probe found, for example, that the facility’s condensate tank, where compounds removed from natural gas are stored, emitted more than two and a half times its allowable level of VOCs over a 13-month period. Chemicals, which can include compounds such as benzene, ethylene, toluene and formaldehyde, are removed from natural gas during the liquefaction process and can cause a range of health effects ranging from cancer eye irritation.

According to state records, the violation began in October 2019 and ended in November 2020 when TCEQ officials granted Cheniere’s request to be able to emit more pollution. This permit amendment also resolved two other violations, for repeatedly exceeding hourly limits for VOCs and carbon monoxide emitted from flare stacks, according to an application document.

A TCEQ spokesperson said changing the plant’s allowable pollution limits was “an acceptable resolution” because Cheniere could demonstrate that these increases in emissions have not harmed the region’s air quality. of Corpus Christi in violation of federal standards.

The United States Clean Air Act’s National Ambient Air Quality Standards place limits on the amount of pollution in a given area and restrict further industrial development only when pollution levels exceed those limits.

The amendment stands out as an extraordinary accommodation of an industrial polluter at the expense of air quality for local residents, said Wilma Subra, a Louisiana-based environmental scientist and president of the environmental consulting firm Subra Company, who reviewed the Reuters reports. Subra said Texas regulators are basically telling Cheniere, if you can’t meet clean air standards, “we’d be happy to help.”

The TCEQ granted the Chenière plant two additional amendments that raised pollution limits and is considering a third.

The Cheniere plant is regulated as a major source of pollution under federal law because it emits over 250 tons of pollution. The designation requires the plant to demonstrate it uses state-of-the-art pollution controls, but specific limits are left to state regulators.

See also  French legislative: turnout at 38.11% at 5 p.m., down slightly from the first round

Kelly Haragan, a professor of environmental law at the University of Texas School of Law, said the scheme for adjusting higher emissions limits to resolve pollution violations at Cheniere raises questions about whether the installation was indeed using the most reliable emission control technology.

Cheniere said he was complying with the regulations.

Residents near the Cheniere plant are concerned about the health effects of the region’s expanding industrial sector.

“They shouldn’t be given permits that just allow emissions to continue to rise,” said Jennifer Hillard, an architect whose home in the waterfront town of Ingleside on the Bay faces LNG tankers coming in and out of the plant. of Chenière. “What is the impact of these types of deviations? … Does anyone know? Is anyone watching?”

Encarnacion Serna, a retired chemical engineer whose home in Portland’s East Cliff neighborhood is less than 3,000 feet from the Cheniere terminal, said a huge flaring event last month created “a heat and a unbearable glare” which forced him to send his grandchildren to visit another relative. house further.

Serna, 70, has already filed three complaints with concerned neighbors against Cheniere this year in response to major flaring events. “We protect our communities from erasure,” he said.

Serna and other residents of Portland, Gregory and Ingleside will challenge Cheniere’s latest air permit application in a contested hearing on June 30.

Cheniere is currently seeking even higher limits for its carbon monoxide and VOC emissions at the Corpus Christi facility, according to regulatory filings, citing the presence of more impurities in its natural gas stream than it realizes. had originally planned.

In the longer term, Cheniere has launched a major factory expansion. The TCEQ has already approved the necessary air permits.