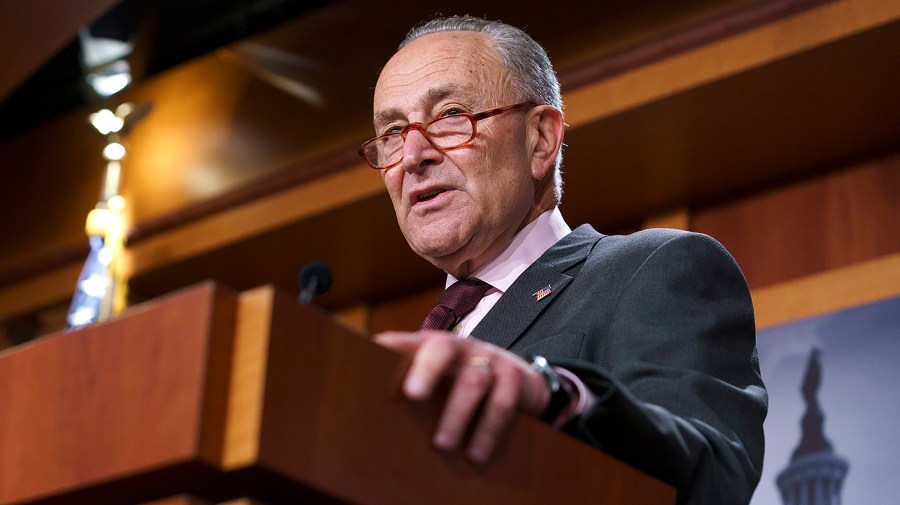 The Democrats’ climate, health care and tax package, which the Senate will consider later Saturday, is expected to dominate the circuit of this week’s Sunday shows.

Senate Majority Leader Charles Schumer (DN.Y.) plans to bring the Inflation Reduction Act to the Senate floor on Saturday as Democrats aim to pass the legislation through conciliation, a process that would pass bills by a simple majority. can be passed without the 60 vote threshold to end a filibuster.

Democrats passed the bill, a scaled-down version of President Biden’s climate and social spending bill known as Build Back Better, after Schumer agreed the package with Senator Joe Manchin (TAUT.Va.), a centrist who is often a key figure. vote for Democrats to secure.

The legislation would invest $369 billion in energy and climate programs over 10 years and spend more than $300 billion on deficit reduction. It would also allow Medicare to negotiate drug prices directly to reduce the out-of-pocket costs of prescription drugs and introduce a 15 percent corporate tax.

After the bill gained the support of Senator Kyrsten Sinema (D-Ariz.), Democrats are trying to present a united front to pass the bill in an evenly divided Senate, requiring all Democrats’ support.

The Senate will undergo a vote-a-rama, where an unlimited number of amendments can be proposed in an often hour-long session as part of the reconciliation process.

sen. Richard Blumenthal (D-Conn.) told The Hill he isn’t doing much about the pending amendments that will be proposed.

“I’ve been through a lot of them, and they’re largely meaningless. People know what the result is. Nobody pays much attention to it,” said Blumenthal, who will appear on TAUT’s “State of the Union.”

sen. Chris Coons (D-Del.) told Politico that the change process will be long and “painful.” He said the vote-a-rama “will start later than we imagine, it will take longer than we hope and it will be more painful to get out of here than any of us have any reason to expect.”

Coons will be a guest on TAUT’s “This Week”.

A group of Senate Democrats has vowed on Twitter to oppose all amendments to the legislation, including Sens. Brian Schatz (Hawaii), Alex Padilla (Calif.) and Cory Booker (NJ). They said the bill isn’t perfect and there are additions they’d like to see in the legislation, but they recognize the fragility of the agreement and want to make sure the bill is passed.

Senate Republicans are expected to be united in opposing the legislation.

Senator Rick Scott (R-Fla.), who will appear on TAUT’s “Face the Nation,” said in a release Tuesday that the Senate Aging Committee should hold a hearing on the bill and how it will affect seniors before voting.

sen. Lindsey Graham (RS.C.) vowed to make the vote-a-rama as painful as possible and as “hell”, saying the Senate Democrats “deserve” it.

He said Manchin and Sinema support legislation that will make life more difficult for the average person. Graham will be featured on TAUT’s “State of the Union”.

Below is the full list of guests who will be appearing on Sunday’s talk shows this week:

Frustrated grassroots leaders say they need even more from the White House Democratic senators vow to vote ‘no’ to all of party’s climate, tax and health law amendments