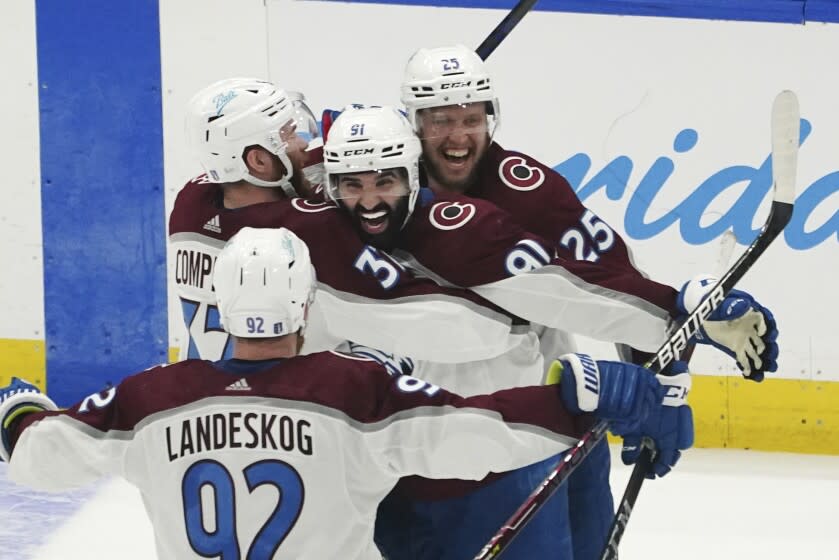 The Colorado Avalanche are on the verge of winning their first Stanley Cup since 2001, thanks to Nazem Kadri’s goal in overtime.

Even if the two-time defending champion Tampa Bay Lightning doesn’t think it should have counted.

Kadri scored 12:02 into the extra period to give Colorado a 3-2 win in Game 4 of the Stanley Cup Final and move the Avalanche one win away from their first championship in more than two decades.

Without specifically saying that Tampa Bay felt Colorado had too many men on the ice for the game-winning goal, Lightning coach Jon Cooper suggested the goal shouldn’t have been allowed.

“We’re all in this together. Players, coaches, referees, everyone. But this one is going to sting a lot more than the others,” Cooper said.

“It will be difficult for me to speak. I’ll talk to you (Thursday). You’ll see what I mean when you see the game-winning goal,” Cooper added. “And my heart breaks for the players. Because we should probably still play.

Back in the lineup after being sidelined since June 4 with a thumb injury, Kadri skated over Andrei Vasilevskiy and slipped a shot under the goalie’s right arm to give Colorado a 3-1 series lead.

“It was a huge win. A resilient win,” said Kadri, who had been sidelined since his injury in Game 3 of the Western Conference Finals against Edmonton.

“I’ve been waiting for this my whole life,” added the Colorado center. “I thought it was time to join the party.”

The Avalanche outshot the Lightning 11-3 in overtime. Vasilevskiy stopped Logan O’Connor on a breakaway, and Colorado had a shot at the post and another hit the crossbar before Kadri finished it off.

Game 5 is Friday night in Denver, where Colorado has won the first two games of the series and is 7-2 in the playoffs.

Anthony Cirelli scored 36 seconds into the game and Victor Hedman also scored in regulation time for the Lightning. They took a 2-1 lead in the third period.

Nathan MacKinnon scored on a second-period power play for Colorado, and Andrew Cogliano tied the game early in the third.

Darcy Kuemper, taken out of Game 3 after allowing five goals in a 6-2 loss, stopped 37 shots and provided the game-winning assist for the Avalanche.

Vasilevskiy finished with 35 saves. He rebounded from allowing 11 goals in Games 1 and 2 to limit the Avalanche to five goals in the last two games.

The Lightning are trying to become the first team to win at least three consecutive Stanley Cup titles since the New York Islanders won four in a row from 1980 to 1983. The Avalanche last lifted the Cup in 2001 .

The Lightning bounced back from playing poorly in Games 1 and 2 to make it interesting by neutralizing Colorado’s speed, limiting the Avalanche’s scoring opportunities and increasing the pressure on Kuemper, who was barely tested then. that he faced just 16 shots in a 7-0 blowout in Game 2.

Cirelli’s goal was the fastest in a Stanley Cup Final since 2006, and the Lightning set the tone for another busy night for Kuemper by outscoring the Avalanche 17-4 in the first period. Two of Colorado’s shots came while skating shorthanded, killing Tampa Bay’s first power play of the night.

MacKinnon’s first goal of the series — 12th in the playoffs — erased Colorado’s early deficit at 5:17 of the second period. The Avalanche equalized again when Cogliano, assisted by Nico Sturm and Darren Helm, scored on a deflection less than three minutes into the third.

AEW wrestler confirms his deal with the promotion has expired