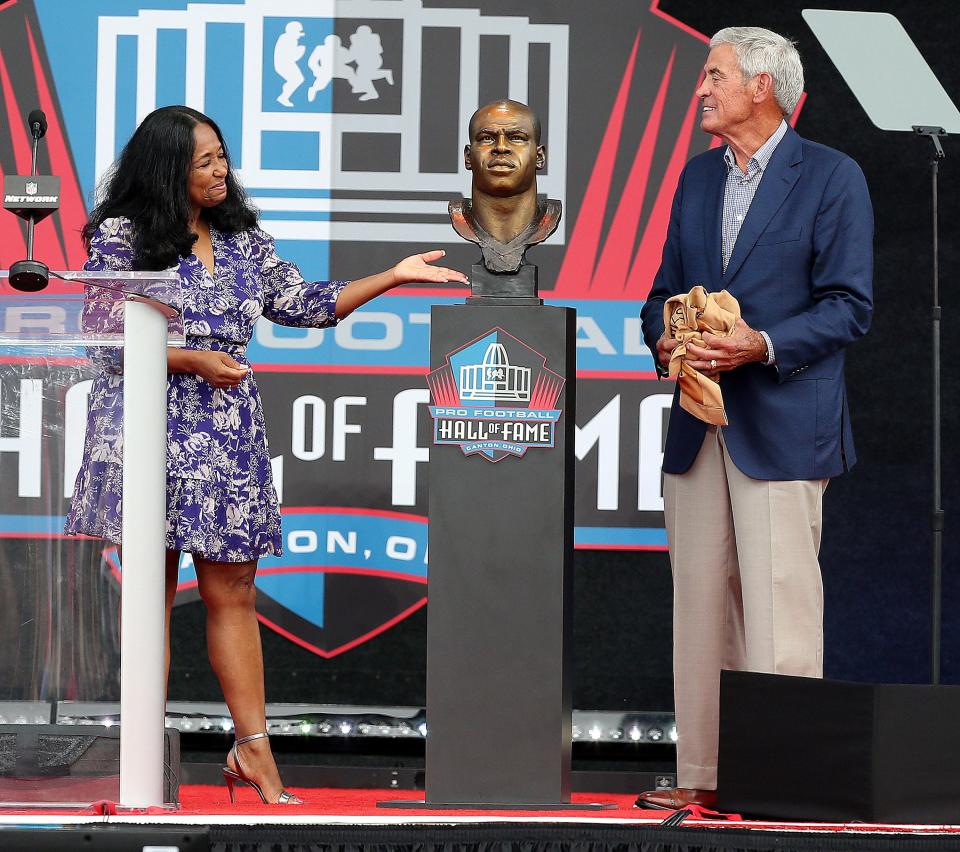 CANTON, Ohio – Did Sam Mills enter the Pro Football Hall of Fame on Saturday as a saint or a panther?

Canton uses bronze busts. Mills’s unveiled at the Enshrinement on Saturday, like everyone else’s, depicted his face, but not his teams.

That said, if Mills had been given his pick in the early 1980s, his only team would have been the Cleveland Browns.

HALL OF FAME: Patriots legend Richard Seymour gets what he deserved

NEWSLETTER: Get the latest sports news straight to your inbox

Mills left Montclair State, New Jersey, in 1981, but Brown’s head coach Sam Rutgliano had a hunch that little Sam, the 5-foot-9 linebacker, might be a player. Mills became convinced that he would make the team.

Rutigliano put the final decision in the hands of defensive coordinator Marty Schottenheimer, then told friends he feared cutting him, as the Browns did, was a bad idea.

And the older Sam was right. Mills played on three Philadelphia/Baltimore Stars teams that won USFL championships, rocked with the New Orleans Saints for nine years, and made such an impression with the Carolina Panthers in three years that they erected a statue.

Mills’ longstanding approach to overcoming was to “keep pounding.” He used the words in a famous post-season speech to the Panthers when he was a Carolina coach who died of cancer.

“He was a father, a friend, a husband and a leader who always kept knocking, no matter the odds,” said his widow Melanie, speaking in his place at the Enshrinement. “He treated everyone with the dignity and respect they deserved.” He made friends everywhere. He made friends during his cancer treatments. He never forgot he was just a man.”

The family chose Jim Mora as a host in the Mills Hall of Fame. It was Mora who nervously gave Mills a place on the USFL roster. After serving as the Saints’ head coach for three USFL Championships, Mora reluctantly gave Mills a roster spot in New Orleans.

“When he first got on the defensive side with the Saints, I had to admit he looked small,” said Mora. “When we set out, he never looked too short at me again.”

Mills was still hammering in 1996, at age 37, when he led Carolina, a sophomore expansion team, to the NFC finals.

Melanie Mills and Mora both stared at Sam’s effigy on the Enshrinement stage as they pulled a gold curtain from the bronze bust together. “I got very emotional when Sam was elected to the Hall of Fame,” Mora said.

This article originally appeared on The Repository: Sam Mills: The Football Hall of Famer’s family continues to knock at the ceremony