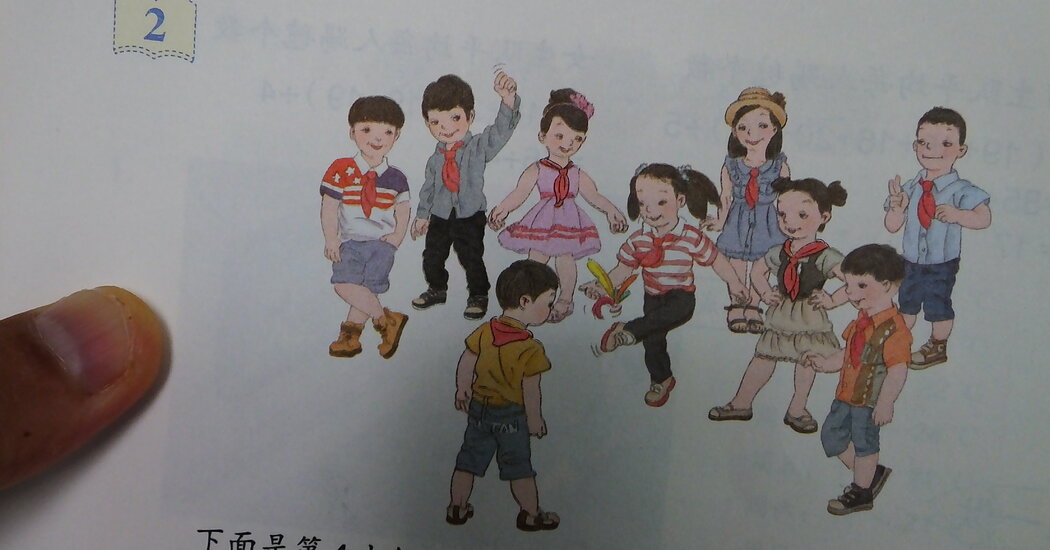 HONG KONG — A little boy pulling up a girl’s dress. Another grabbing a classmate from behind, his hands on his chest. Bulges protruding from the pants of male students. Suspicious pro-American images.

The illustrations can be found in a Chinese public publisher’s mathematics textbooks for elementary school students – books that have been in use for years. They sparked a furor in China after being flagged on social media last week by angry commenters as rude, sexualized and anti-China.

The controversy prompted the textbook publisher to apologize. China’s Ministry of Education first said it was ordering an inspection of illustrations in primary and secondary school textbooks. Then on Monday, as anger spilled online, the ministry announced a sweeping nationwide investigation into all primary, secondary and university textbooks.

“Issues identified will be corrected immediately, and those responsible for violations of disciplines and regulations will be held severely accountable,” the ministry said Monday. “There will be zero tolerance.”

Tang Jiafeng, a writer specializing in education, wrote on Weibo, a Chinese microblogging platform, that he felt “shocked, in disbelief, sad and angry” about the illustrations in the math book.

“Primary textbooks are the foundation of the country and the nation, and an important guarantee for the formation of children’s outlook on life and values,” he wrote. “It is impossible to overstate their importance.”

He called not only for corrections and apologies, but also for an investigation and for those responsible to be held accountable.

The outcry over what some saw as obscene and otherwise offensive images in math books aimed at impressionable minds comes as China has tightened its grip on the ideological content and sensitive history of textbooks. Universities have been ordered to emphasize the study of Marxism and the writings of China’s top leader, Xi Jinping. In 2015, Yuan Guiren, China’s education minister, ordered a closer review of foreign textbooks and said those that promote Western values ​​should be banned from classrooms.

The math books, published by People’s Education Press, a large state-owned company controlled by the Ministry of Education, have been around for about a decade, according to Chinese reports. The illustrations were approved in 2013 for grades one through six, according to reports. It’s unclear exactly how the problematic designs have escaped scrutiny all these years. Some social media users highlighted the images last week, prompting parents and carers to express their outrage.

People’s Education Press provided no explanation of how the illustrations were selected. But they were attributed to the studio of an artist named Wu Yong, who has been attacked online and accused of harming China. The artist, who could not be reached for comment, did not publicly address the controversy.

Some drawings are weird or silly, like children sticking out their tongues. But others show children appearing to grope their classmates on a playground. Another showed a schoolgirl with her underwear exposed as she played a game. Many critics said the designs made children look ugly, with wide, droopy eyes.

Others argued that the textbooks also contained anti-China messages, such as a poorly rendered Chinese flag. Still, some have found allegedly pro-foreign images, such as a boy flying in a biplane similar to Japanese and American planes. Some even pointed to images of children wearing clothes with what looked like stars and stripes in the colors of the American flag.

The Latest on China: Essential Things to Know

Public discontent. Chinese government censorship and surveillance, which the pandemic has worsened, is pushing a small but growing group of Chinese to seek an exit. Young Chinese in particular are embracing the idea that they might need to flee the country in pursuit of a safer and brighter future abroad.

A new trick for internet censors. To control the country’s internet, Chinese censors have relied for years on practices such as deleting posts, suspending accounts and blocking keywords. Now they have turned to displaying users’ locations on social media, fueling pitched online battles that link Chinese citizens’ locations to their national loyalties.

An uncertain harvest. Chinese officials are issuing warnings that after heavy rains last fall, a disappointing winter wheat harvest in June could push up food prices – already high due to war in Ukraine and bad weather in Asia and the United States – worsening hunger in the country. poorest countries in the world.

See also  In South Texas, Jessica Cisneros is calling for a recount in her first runoff against Rep. Henry Cuellar.

“As a father of a child, to be honest, I’m really worried,” Li Yuguo, director of Beijing Oriental University Sports Institute, wrote on Weibo.

“For a child who has just started school to encounter such an illustration, from an early age to imperceptibly receive this kind of unhealthy influence,” he added, “it is not a question of art ; it involves education, culture and even infiltration abroad. There are no small things when it comes to children; it affects our future.

The publisher, responding to the public’s anger, initially contented itself with saying that it was evaluating its textbooks.

“We have organized experts to study them carefully and humbly adopt good opinions and suggestions from all walks of life,” the company said in a statement. “We started redesigning the covers and some illustrations of the relevant math textbooks to improve the painting method and elevate the artistry.”

But the criticisms have only grown. Two days later, the editor apologized.

“We have given serious thought and feel deeply guilty and guilty, and hereby express our deepest apologies,” he said, adding that he would find a new team of illustrators to redesign the textbooks. math.