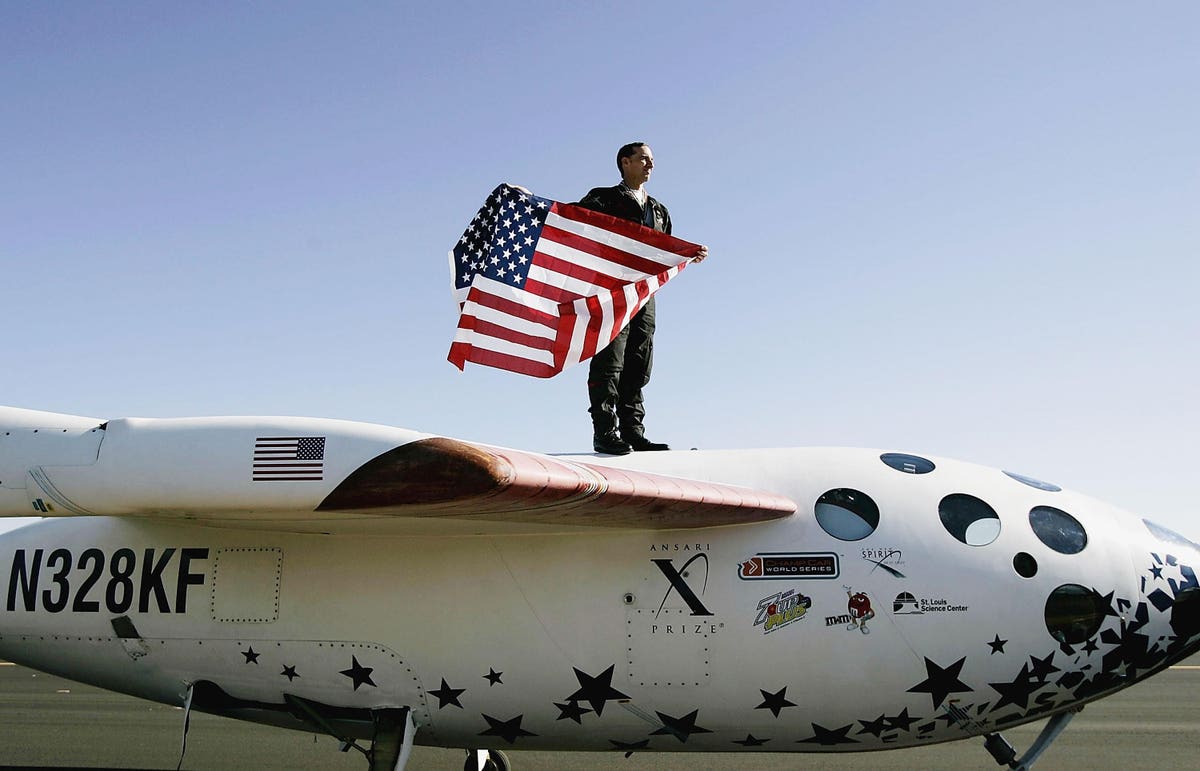 The first time I met Brian Binnie was at Mojave Airport, in 1999. I was researching a story for TAUT magazine about the fledgling private space movement, and had gone west to interview Gary Hudson, the 1996 founder of Rotary. Rocket, a then-promising private space company.

What made Rotary unique among other companies competing for the $10 million Ansari X Prize (two sub-orbital flights to 100 kilometers in the same private vehicle in two weeks) was that Hudson had a full-size mock-up of its rocket — the Roton — something physical that investors and the media can touch and photograph. None of the others had anything like this. Their strengths were mainly visionary ideas and complex schemes. When it was my turn to climb through Rotary’s vehicle, none other than Brian Binnie, a jolly Scottish-American chap, was my guide.

Fast forward a few years to when Binnie defected to rocket scientist Burt Rutan’s Scaled Composites, to help develop SpaceShipOne, a rocket plane that was carried aloft by a mothership and then launched into the air into suborbital space. Hudson’s firm, which had envisioned a more conventional, vertical rocket, had since been sidelined. I remember hearing the news on October 4, 2004 that Binnie had flown the second leg of the X Prize flight and sealed $10 million in loot for Rutan’s company. Mike Melvill had completed the maiden flight a few days earlier.

After his flight, I interviewed Binnie several times, even as a guest on my Exploring Legends series at The Explorers Club as part of Space Stories. (The interview is still available online at C-Span.) Interestingly, our chat that day was just a week before Virgin Galactic’s October 31, 2014 deadly test crash of SpaceShipTwo, a crude version of SS1 that can carry eight people against three for SS1 .

Sir Richard Branson backed VG, and partly assuming that VG’s bigger concept vehicle would work, but also on Binnie and Rutan’s success with SS1, I made a 10% down payment for a future spaceflight (still waiting). When the VG crash happened, I didn’t back down like some future astronauts did, but kept my ticket, reasoning that things happen during testing to ensure that commercial space tourism flights, when launched, pose less of a risk. .

In 2010, I had to revisit Mojave, this time for a world-class driving story, an outfit that rented out the 12,500-foot runway there to give speed buffs a chance to break the 200-mph barrier in a fleet of supercars. (It wasn’t cheap: $5,000 for a day.) I joked with Binnie that since I came out, maybe he wanted a thrilling ride. His office was there, after all, at the airport, so it wouldn’t take much effort. Surprisingly, Binnie agreed, and he didn’t flinch when I took him to 202 mph in a McLaren SLR. He later told me that his young children were more impressed by the fact that he had driven more than 200 mph in a car than several times the speed of sound on his SS1 spaceflight.

Yes, Binnie was fearless, but also had a sense of humor. He joked that he would return the 200-mph favor by personally taking me to space with VG when my ticket number came up. I remember another story he told me about the exciting day of his historic SS1 flight. On the runway, just before he climbed aboard the spaceplane, Binnie’s mother-in-law ran eagerly to hug him, spilling a 16-ounce soda into Binnie’s spacesuit. He told me that he was not only uncomfortable with the sticky liquid on his skin for the next few hours, but also worried that the extra weight could affect his chances of making the necessary 100-kilometer flight. (It didn’t. SS1 reached a maximum altitude of 367,500 feet or 112 kilometers.)

When I heard of Brian’s death last week, I was shocked. I had received an email from him a few days earlier. He had also recorded a recent “good luck” video for a friend who had a ticket for a suborbital flight.

There is speculation about how Brian died, but nothing definitive. That’s not as important as remembering Brian for who he was. Without his brave, epic SS1 flight, you could argue that there would be no SpaceX (Elon Musk), and certainly no Virgin Galactic (Branson) or Blue Origin (Jeff Bezos). As the second civilian to fly to space aboard a private spacecraft – and believe me, he had to use his fighter pilot skills to pilot that thing, not just joyride it as a space tourist – he really helped pioneer a move that will continue to expand as much as its airline business, as more competitors come online, lowering ticket costs.

RIP Mr Binnie. Like the American aviation pioneers before you—Charles Lindbergh, Chuck Yeager, Alan Shepard, John Glenn, and Neil Armstrong—your courage has propelled technology—and our society—forward. History will remember you for that. You were old-fashioned, humble, had all the right things. The world will miss you, as will I. thank god.

Durga Puja 2022: What is Sindoor Khela? Know its meaning

World Animal Day 2022: History, significance of the occasion and how to celebrate it