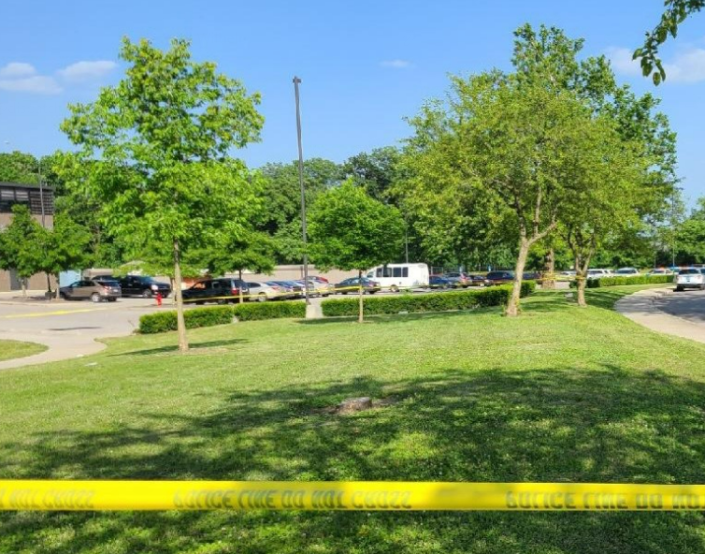 A man who shot the accused teenage assailant in last week’s fatal Glenwood Park shooting in the Hilltop was a bystander who was linked to a participant in a fight that quickly led to a shooting, police said Columbus at a press conference Wednesday.

Police say the incident began around 5.20pm with a verbal argument in a Glenwood Park parking lot between the town’s swimming pool and a community center, which served as a cooling center during last week’s power outages. and temperatures in the 90s.

Mobile phone video of the incident released by police on Wednesday shows that two teenage girls began to fight. One had apparently grabbed the other by the hair and was pulling her when police said 15-year-old Avent’tay Soloman – whose girlfriend was involved in the fight – began firing his gun at a group of people.

Police say Atayia Nichols, 24, a half-sister of one of the fight participants, was not involved in the fight and appeared to be trying to pull Soloman out of the middle of the altercation when he began firing with him. his weapon.

Nichols was shot by Soloman and taken to OhioHealth Grant Medical Center, where she died of her injuries at 5:54 p.m., police said. An 18-year-old woman was also injured by Soloman, who was later shot himself by an unidentified man with a gun.

Police followed a trail of blood and found Soloman several blocks west on Wrexhan Avenue. He was taken to Wexner Medical Center at Ohio State University in critical condition, but survived his injuries.

Soloman was a Briggs HS athlete who had been employed by the Columbus Youth Anti-Violence Jobs Program for five days before the shooting. He was assigned to an elementary school in Hilltop but was off duty at the time of the shooting.

The man who shot Soloman was related to one of the participants in the fight, but was not himself a participant, the Columbus police detective. said Delbert Chapman.

Chapman said police questioned the man and it appears he acted in self-defense. Police will discuss the adult shooter with prosecutors to determine if charges should be brought.

The man, whom police have declined to identify, currently faces no charges. Police said they are still investigating where Soloman got the gun he used in the shooting and whether the man who shot Soloman legally possessed his gun.

“The question you have to ask yourself: if he hadn’t done this, would it have stopped more shots being fired by Mr. Soloman?” His action probably helped save people,” Chapman said.

Police declined to say how many shots each of the two shooters fired, although up to eight shots could be heard in cellphone video released by police on Wednesday.

See also  How candidates vying for Tuesday's primary elections are reacting to the Supreme Court's decision.

According to police, a screenshot from a separate video shows Soloman brandishing a handgun and striking someone with the weapon moments before the shooting.

Prosecutors said Tuesday they intend to have Soloman tried as an adult.

The shooting is still under investigation, police said.

sergeant. Joe Albert, a spokesman for the police division, said the city sees a tendency for verbal arguments to turn physical and then firearms soon after fighting begins.

“Unfortunately what we see in the city right now as soon as a (fight) happens – guns are produced – and that’s what leads to our shootings, especially involving young people,” said Albert.

Cole Behrens is a reporter for the Columbus Dispatch, covering public safety and breaking news. You can reach him at [email protected] or find him on Twitter at @Colebehr_report