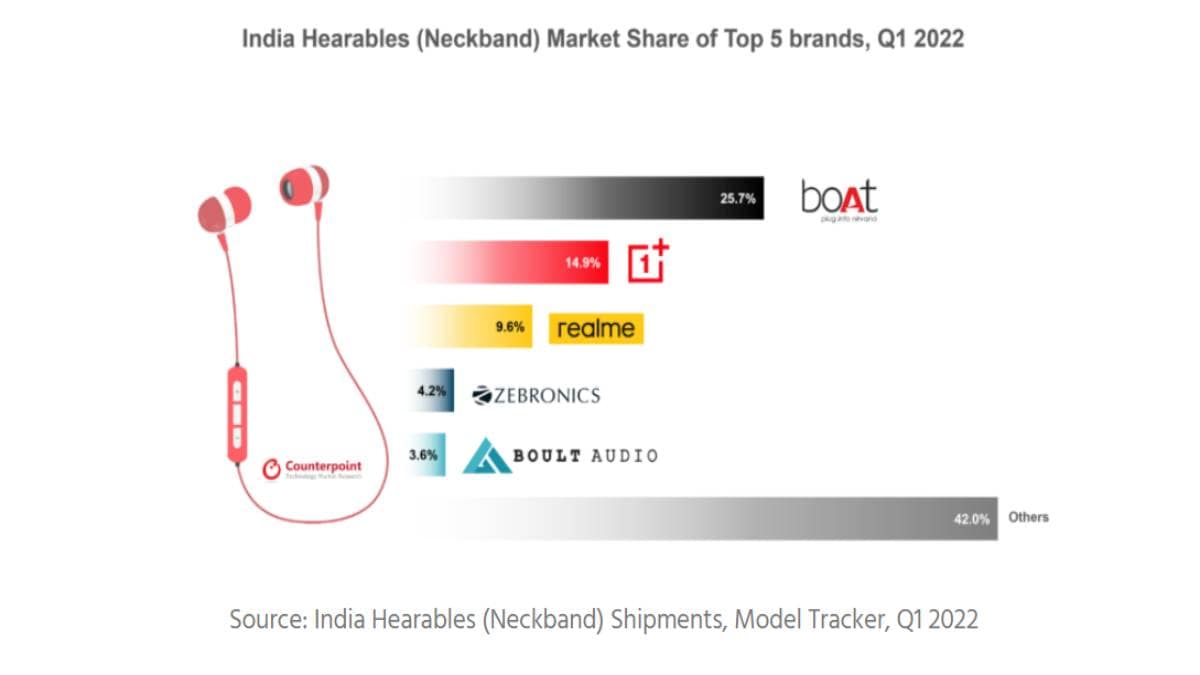 The neckband headphones market in India witnessed a 13% year-on-year (YoY) decline in the first quarter of 2022, according to the latest report from Counterpoint Research. However, the market grew by 34% annually in 2021. OnePlus and Realme took second and third place respectively, while boAt took first place with a market share of 25.7%, according to the report. Meanwhile, the report also suggests that OnePlus’ Bullets Wireless Z Bass Edition was the best-selling neckband earphone in Q1 2022.

According to the latest research from Counterpoint, India’s neckband headphones market declined by 13% YoY in the first quarter of 2022. the channel in the fourth quarter of 2021 ahead of the holiday season. .”

According to research, Boat has captured a 25.7% share of the overall neckband headphones market in India. Boat’s success is linked to its significant presence in the lower price segment. The Boat Rockerz 255 Pro Plus is the brand’s best-selling model.

OnePlus followed Boat and maintained its second position with a 14.9% market share thanks to the success of the Bullets Wireless Z-Bass Edition neckband headphones. In counterpoint, it was the best-selling neckband earphone in the first quarter of 2022.

OnePlus is then followed by Realme with a 9.6% market share in the first quarter of 2022. Zebronics took fourth place by entering the top 5 neckwear brands in India for the first time. The brand has managed to establish itself thanks to its multiple economic segments launched on the market.

Fifth place was taken by Boult Audio with 6x annual growth in the first quarter of 2022. The Curve is considered the brand’s best-selling device, according to the research.

Speaking of the overall market, Senior Research Analyst Anshika Jain said, “The popularity of neckband devices is increasing as users move from a wired ecosystem to the next level and also want an alternative hearing aid. Like TWS, the Indian neckband market is dominated by local players, who captured around 58% of the market share in the first quarter of 2022. These players focused on providing the emerging features at affordable prices, such as the voice assistance, low latency game mode, gesture music controls and instant charging technology. Additionally, next-gen neckbands from top brands come with increased total playtime, mainly focusing on the budget segment (Rs.1,000-Rs.2,000).

Counterpoint has also noted some notable brands that have also had a significant impact on the Indian neckband headphones market. They include Xiaomi, Noise, Oppo, Ptron, Hitage, Ubon and Dizo.