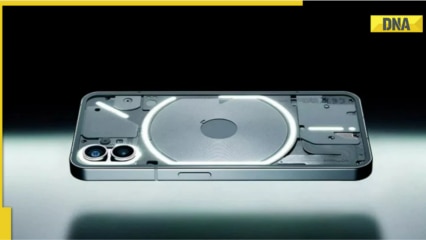 One of the most anticipated smartphones of the year, the Nothing(1) phone is set to launch on July 12. The brand has achieved a lot of success as it was started by former One-Plus co-founder Carl Pei.

The London-based company created hype around the launch of Nothing Phone (1) by sharing minute details about the phone. According to the firm, the smartphone will come with the Snapdragon 778G+ processor, new rear panel and in-display fingerprint sensor.

Although the company hasn’t disclosed many details about the smartphone, the leaks have given plenty of clues about the design and specifications of the product.

READ | Nothing Phone (1) Flipkart discount revealed ahead of India launch on July 12, here’s how much it could cost

According to the leaks, the smartphone will come with a 6.55-inch OLED display panel which will support 120Hz refresh rate and will have a center-aligned punch-hole camera on the top.

See also  Nothing Phone (1) gets new features, improvements with Nothing OS update

The back of the Nothing Phone (1) will have a Glyph interface. Glyph lights include five LED strips that can light up individually for different use cases, mirroring charging indication and Glyph ringtones function.

Based on speculation, the device will come in two color variants – black and white, both of which will feature white LED lights.

Its Qualcomm Snapdragon 778G+ chipset will support wireless and reverse charging. Buyers may be able to get an 8/128 GB variant and a 12/256 GB variant.

See also  Nothing Phone (1) Flipkart discount revealed ahead of India launch on July 12, here's how much it could cost

Leaks have hinted that the Nothing Phone (1) will feature a 50MP main camera and a 16MP ultrawide camera. The phone is likely to have a 4,500 mAh battery.