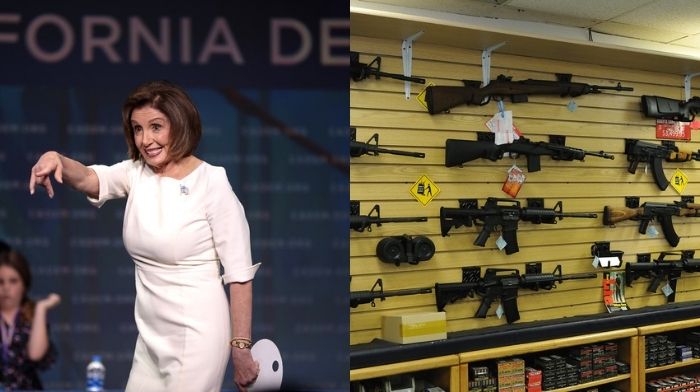 House Democrats will once again live by that tried and true adage — “Never let a crisis go to waste” — as they try to push forward a surplus of gun control measures as early as this week.

They are looking to advance bills as early as Thursday.

By the time the new gun legislation is passed you will realize that it is only there to keep guns in the hands of the majority of the poor and middle class because of what is to come . By then it will be too late.

Throw it all in the hopper

Senator Ted Cruz represents the other side of the aisle, condemning gun control at the NRA’s annual convention:

Taking guns away from responsible, law-abiding Americans will not make our nation safer. #NRAconvention pic.twitter.com/nCiBs9jC7V

Sign up to receive the latest new policies, ideas and commentary delivered straight to your inbox.

Cruz also mentioned the one thing Democrats won’t do when talking about guns:

It is much easier to shout about guns than to demand answers about the shortcomings of our culture. pic.twitter.com/3IlVTShVrj

RELATED: Joe Rogan Overturns Gun Control, Weapons Bans: ‘Only Criminals Will Have Them’

When the subject of mental health comes up, it is quickly brushed aside by Democrats, who are instead in favor of taking guns from law-abiding Americans.

But during the summer of 2020, when it was fashionable for Democrats to “defund the police,” they were singing the praises of, wait for it, counselors and social workers. Wouldn’t they come under “mental health”?

A bill was introduced in July 2020 by Democrats, including several “Squad” members, called “The Counseling Not Criminalization Act”. The bill would “prohibit the use of federal funds to maintain police in schools.”

The bill would have provided a $2.5 billion grant to “hire the counselors, social workers, nurses, school psychologists and other staff they need to support students and create safe schools without police.” “.

Maybe the Squad and Ted Cruz can have a talk now.

America’s top arms dealers are Democratic politicians. Whenever there is a tragedy, they instinctively blame the gun, not the killer, or those who missed the signs. Then they threaten “gun control” legislation and people go out to buy more guns and ammunition.

DC Clownshow On Guns will continue

As the debate over gun laws continues, the political antics going on on both sides of the aisle will continue. President Joe Biden continues to make totally false statements regarding guns.

Constitutional law scholar Jonathan Turley, during a “TAUT News Live” appearance this weekend, remarked that “he (Biden) is undermining his own case by repeating what is ironically misinformation.”

The companion to Biden’s gun comment was that a 9mm handgun is a “high-caliber weapon” in which a bullet “blows the lung out of the body.”

In another political stunt, Senate Majority Leader Chuck Schumer (D-NY) is “open” to voting on bills that experts say will most likely fail the Senate, so Republicans will be seen voting against gun laws.

Democrats might not encounter as much opposition as they might think. Senate Minority Leader Mitch McConnell (R-KY) said Thursday he sent GOP Sen. John Cornyn to “negotiate” with Democrats on gun control.

On Thursday afternoon, a group of five Democratic senators and three Republican senators, including Lindsey Graham (R-SC), Bill Cassidy (R-LA) and Pat Toomey (R-PA) met in the basement of the Capitol to discuss extensive background checks. and “red flag” legislation.

Democrats only talk about gun violence when it serves their political agenda.

These bloodsuckers control some of the dirtiest and most violent cities in the United States, but that doesn’t stop them from spewing their rhetoric about gun laws.

Now is the time to support and share the sources you trust.
TAUT ranks #3 on Feedspot’s “Top 100 Political Blogs and Websites”.