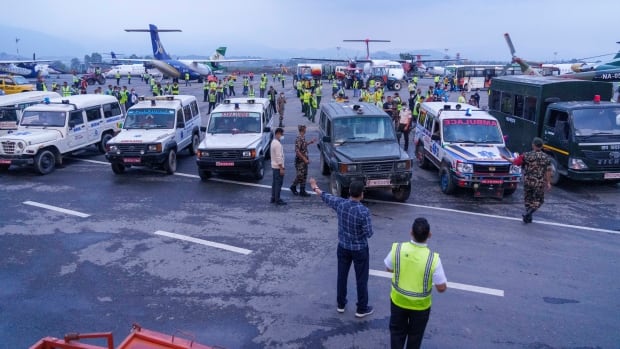 The bodies of 22 people, including 19 passengers and three crew members, who were on board a plane that crashed into a Himalayan mountain in Nepal two days ago have been recovered, an official said on Tuesday. .

Two Germans, four Indians and 16 Nepalese were on board the De Havilland Canada DHC-6-300 Twin Otter plane which crashed 15 minutes after taking off from the tourist town of Pokhara, 125 kilometers west from Kathmandu on Sunday morning.

The plane was bound for Jomsom, a popular tourist and pilgrimage site, 80 kilometers northwest of Pokhara, on what should have been a 20-minute flight.

See also  Takeaways from the TAUT interview: Biden on inflation, the American psyche

The last body recovered on Tuesday

Nepalese soldiers and rescuers had recovered 21 bodies from the wreckage, strewn on a steep slope at an altitude of around 4,400 meters on Monday. They recovered the last body on Tuesday morning, Karna said.

See also  WATCH: Light aircraft crashes along the R44 between Stellenbosch and Strand

The bodies of 10 victims were brought to Kathmandu on Monday, and the remaining 12 bodies would be airlifted to the capital on Tuesday, the CAAN official said.

“The bodies will be sent to the [Tribhuvan University] University Hospital for autopsies (…) and will be handed over to families after identification,” Karna said. The names of the victims were released on Sunday.

The Nepalese government has set up a five-member panel to determine the cause of the accident and come up with preventive measures for the aviation sector.

Nepal, home to eight of the world’s 14 tallest mountains, including Everest, has a history of air crashes.

In early 2018, a US-Bangla Airlines flight from Dhaka to Kathmandu crashed on landing and burst into flames, killing 51 of the 71 people on board.

In 1992, all 167 people on board a Pakistan International Airlines plane were killed when it slammed into a hill while trying to land in Kathmandu.