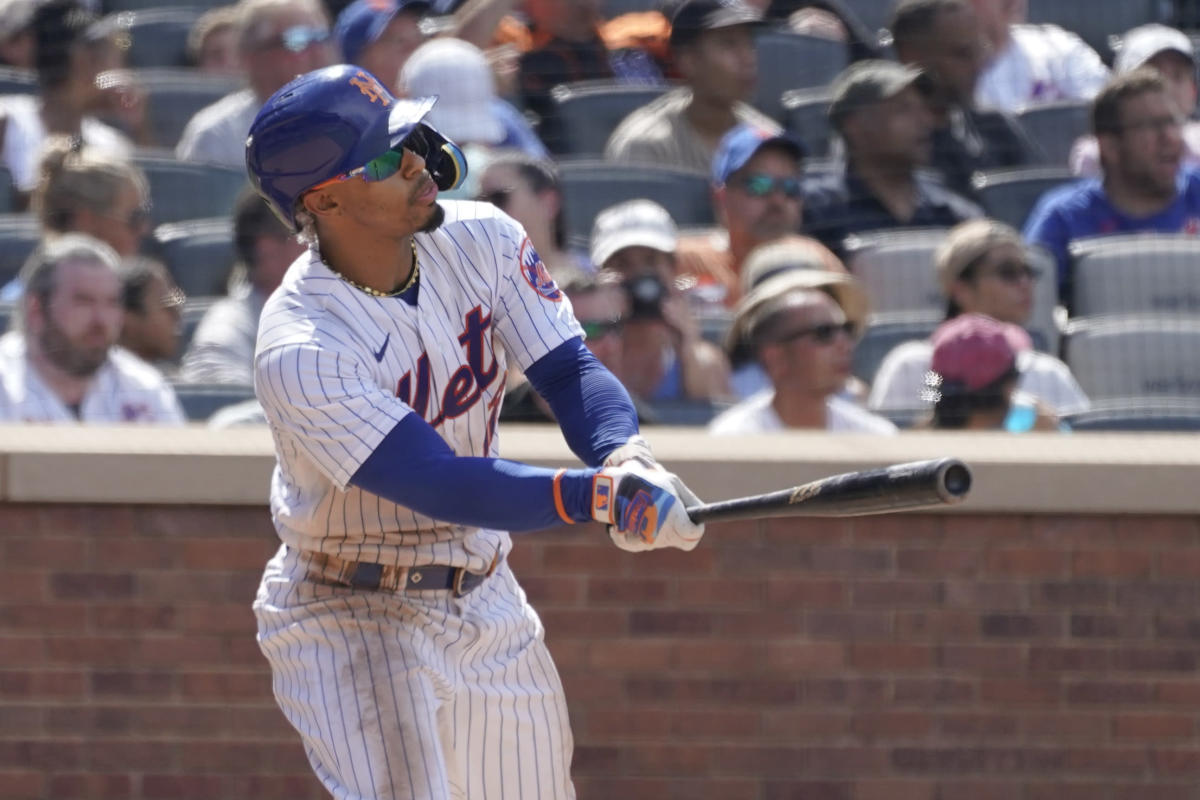 NEW YORK (TAUT) — Francisco Lindor doubled padding atop the midfield outfield wall to drive in half, Edwin Díaz put out a fire for the last two outs and the New York Mets defeated the Atlanta Braves 8-5 on Saturday in a double cup opener.

After consecutive walks to Brandon Nimmo and Starling Marte, Lindor hit a drive against Tyler Matzek who bounced off the orange home run line and came back into play just before the home run apple of Citi Field. Umpires initially ruled a double and that call was confirmed via replay.

Lindor was concerned that midfielder Michael Harris II would have a chance to grab the ball.

“If he goes up, he has a very good chance of catching it,” he said. “So I just hoped he would strike anyway. I’m just happy with the results.”

Lindor remained on 19 homeruns this season, one less than his total last season. He had three hits, including an RBI single in a two-run first inning against Jake Odorizzi (4-4). His double extended New York’s lead to 5-0 and was part of his sixth three-hit game this year.

“I think that was a home run,” said manager Buck Showalter. “Our guy (replay coordinator Harrison Friedland) said it hit the back black wall and then came back.”

Pete Alonso increased his NL-best RBI total to 92 with a single and advanced 10 ahead of St. Louis first baseman Paul Goldschmidt.

Jeff McNeil, James McCann and Marte contributed RBI singles as the NL East leaders improved to an MLB-best 30-9 after a loss and advanced 4 1/2 games for the Braves.

Ronald Acuña Jr and Matt Olson hit RBI singles in the seventh for the Braves, who are 4-6 in the season series.

Olson and Robbie Grossman also had RBI singles during Atlanta’s three-run ninth. Grossman’s single prompted Showalter to call Díaz, and he needed seven pitches to complete his 25th save.

Spotstarter David Peterson (6-2) helped New York’s seventh doubleheader get off to a great start by giving up three hits in 5 1/3 innings for his third scoreless start this year.

Peterson struckout five and walked three. He was consistently ahead of batters, throwing first-pitch strikes to 14 of the 22 batters.

“It’s just kind of an understanding of the situation we’re in,” Peterson said. “We have five great starters, we couldn’t ask for a better rotation. So being that sixth man is something I’m very proud of.”

Peterson left with a lovely ovation after kissing Olson on a change-up. Peterson also stranded Acuña in third place to end the fifth after the star slugger doubled and slid in safely before Marte’s throw from rightfield.

“He was clear on today and had some good stuff,” said Olson.

After the opener, Peterson was given an option on Triple-A Syracuse.

The lefthander started his outing with the bases loaded when he hit Travis d’Arnaud with a pitch. On the next pitch, Grossman lined out to Lindor and shortly after Peterson escaped, the Mets gave him a 2-0 lead.

Odorizzi worked through his Atlanta debut after being acquired from Houston. He gave up three runs (two earned) and six hits.

Odorizzi fell behind half of the 22 batters he faced and also made a throwing error on a pick-off play that led to New York’s third run.

Braves: RHP Darren O’Day (left calf strain) started a rehabilitation assignment at High-A Rome on Friday, throwing 13 pitches in the fifth inning to take home the win. O’Day has been sidelined since July 12. … Odorizzi was visited by a trainer after his first throw of the fifth and said he was getting cramps in his hamstring. Odorizzi has received an IV and is expected to make his next start.

Mets: RHP Tommy Hunter (low back pain) was placed on the injured list.

Atlanta: LHP Max Fried (10-3, 2.58 ERA), who has the majors longest active streak without a homer with nine starts and 59 1/3 innings, begins the second game.

How to watch the Browns-Jaguars game on Friday night?