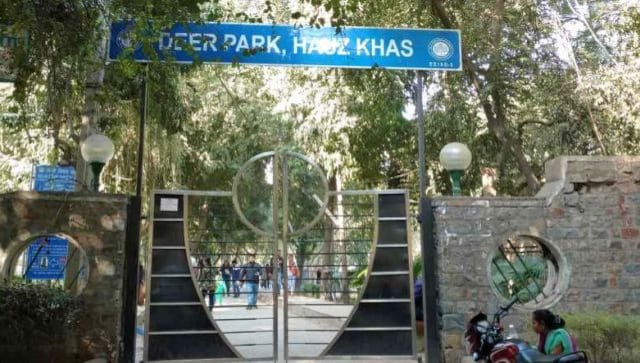 Located in the Hauz Khas area of ​​South Delhi, the iconic and picturesque Deer Park has now become the latest cause for a fight between Bharatiya Janata Party (BJP) and Aam Aadmi Party (AAP).

BJP’s Shailender Singh Monty has accused AAP’s MLA Somnath Bharti of trying to seize land in the park allegedly to build a graveyard for Muslims.

What is behind the ‘serious’ problem? We’re trying to get to the truth in the case.

The ‘land grab’ at Deer Park

He further alleged that Bharti was trying to exert pressure to hand it over to the Waqf board.

In his accusation, Shailender said: “Somnath Bharti first placed a sign in the cemetery in the park. Later, his men came to clean the park. Then, on September 10, some people came and buried a body in the park. Not even a single person was local. Now Somnath Bharti is putting pressure on Delhi Development Authority (DDA) officials to declare the park a graveyard.”

Shailender said Bharti committed land grabs to benefit his friend, a builder named Liyaqat Ali. He added that Bharti now wanted to build a road across the park so that property prices would rise, benefiting his friend.

At the demonstration, Gupta demanded the resignation of the AAP MLA. “Land worth crores of rupees, which is part of the Deer Park in Hauz Khas, has been compromised for the expansion of a graveyard commissioned by Kejriwal’s close associate and local MLA Somnath Bharti and the Waqf administration. The land actually belongs to DDA.”

“After coming to power, Arvind Kejriwal’s government is setting new records of corruption, but the BJP will continue to protest against the government-protected land mafia,” he said.

Gupta added that the protest will continue until concrete action is taken against AAP leaders over the land grab issue.

He also demanded that Lieutenant Governor VK Saxena punish the suspects involved in the whole case.

Bharti from AAP hits back

The AAP’s Malviya Nagar MLA laughed off the allegations, saying it was the BJP’s attempt to unite people for vote-seeking ahead of the MCD polls.

“In order to get votes in the Delhi Municipal Elections (MCD), they started this Hindu-Muslim community issue. No one came to Somanth Bharti for a graveyard and I did not step into this matter. It is not about a graveyard, but about corruption by local BJP politicians. They don’t work for the good of people, but as the election approaches, they start to stir up common issues. My constituency will not let this polarization formula succeed,” Bharti said in a video posted to his social media handle.

He added that he would soon send a defamation message to Shailender Singh of the BJP.

It is not the first time that the two leaders have attacked each other. In 2015, the AAP accused MLA Shailendra of building a hotel on DDA land. He revealed that he had also filed a complaint against him, but no action was taken.

The country in question

The Deer Park, which led to the fighting between the two sides, is located in South Delhi and is named after the famous social worker Aditya Nath Jha.

The Deer Park along with the associated District Park (which houses Hauz Khas Lake) and the adjacent Rose Garden are collectively referred to as the “lungs of Delhi”, due to their heavy green cover. The park is a much-heard favorite and a haven among Delhites seeking a break from the pollution and dust of the city.

It is one of the most ecologically sensitive areas in Delhi and supports a network of several interdependent animal relationships. The sight of deer herds hopping around is very beautiful and not to be missed.

Benefit Uddhav: Shiv Sena, the significance of Shivaji Park and the rally tradition of Dussehra