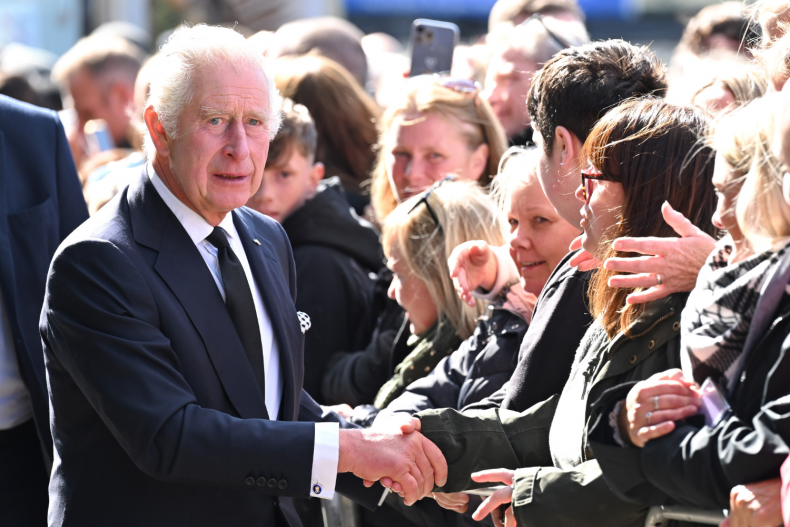 A viral video showing King Charles III’s interaction with a person of color as he greeted people in the days before Queen Elizabeth II’s state funeral has sparked debate online.

The video has been viewed over 5 million times since it was uploaded to Twitter by user @RamaboduObakeng, who wrote, “Black man, you’re on your own.”

It’s because discussions about the royal family and race have become more frequent in recent years. This follows interviews given by the Duchess of Sussex about her experiences as the first biracial person to marry in the senior branch of the British monarchy.

The video comes from coverage of an engagement where King Charles and the Prince of Wales met members of the public who were queuing to see the late Queen.

The video’s caption seemed to suggest that a person of color in the crowd didn’t interact with the king in person, while other people around him did.

“This guy did it on purpose,” one user wrote of Charles, while another added that the clip was “interesting.”

However, other commentators pointed out that Charles had interacted with people of color elsewhere during his wanderings.

Other users pointed out that he acknowledged the man in question shortly after he appeared to be skipping him after being distracted.

“King Charles III shook hands with many black people that day, nice to try racism,” said one of them Twitter reply to the movie.

Charles has a long track record of working with Britain’s black communities, which was recently celebrated with an invitation to edit Britain’s only black newspaper. The voice for its 40th anniversary edition.

In his editor’s letter, Charles praised the paper for ensuring “Britain’s black communities have been heard over the past four decades” and wrote that he was grateful to be part of the discussions within them.

“You have welcomed me into your communities with great enthusiasm and I am grateful that you have always been candid with me about the issues you constantly face and how I can help,” he said.

With the invitation to Charles to contribute to the anniversary edition, the editors of The voice did not pass unnoticed the royal family and the monarchy’s historical ties to slavery and alleged racism, but asserted that progress must be made.

“This is not about the monarchy as an institution or the history of colonialism or slavery about which he expressed his ‘personal grief’ at the Commonwealth conference earlier this year,” they wrote of Charles.

“Whatever the differing views, it’s important to note the positive work that has taken place to open doors in the arts, business and elsewhere.”

Among the wider royal family, discussions about race have mostly centered on the experience of the Duchess of Sussex who married Prince Harry in May 2018.

Early in the couple’s relationship, racially insensitive newspaper articles were written about Meghan, stating that she “came (almost) straight from Compton” and that her “exotic TAUT” would enrich the royal bloodline.

This coupled with racist attacks on social media prompted Prince Harry to issue a statement, through a palace press secretary, saying a line had been crossed with “the racial undertones of commentary pieces; and the outright sexism and racism of social media.” media trolling and comments on web articles.”

The statement added that Harry was “concerned for Ms. Markle’s safety and deeply disappointed that he has not been able to protect her … This is not a game – it is her life and his.”

After two years, the couple made the personal decision to leave Britain and resign from their roles as working members of the royal family.

In 2021, during interviews with Oprah Winfrey, Meghan and Harry revealed that racism had played a role in their decision to leave Britain.

“It brought out some of the people who were racist in the way it was charged,” Meghan said of the tabloid press’s role in the abuse she faced at the time. “And that changed the threat. That changed the level of death threats. That changed everything.”

In a docuseries with Winfrey titled The me you can’t seeHarry emphasized parallels between his mother’s and his wife’s treatment.

“My biggest regret is that earlier in my relationship with my wife I didn’t take a more stance by proclaiming racism when I did,” he told the TV veteran.

“History repeated itself,” he added later. “My mother was haunted to her death while dating someone who was not white. Now look what happened? Do you want to talk about history repeating itself? They are [the media] don’t stop until she dies.”

As the new King Charles III begins his reign, he inherits the throne at a time when there are discussions about race, racism and discrimination, both present and historical, and it remains to be seen what role the royal family, if any, will play. play in this one.