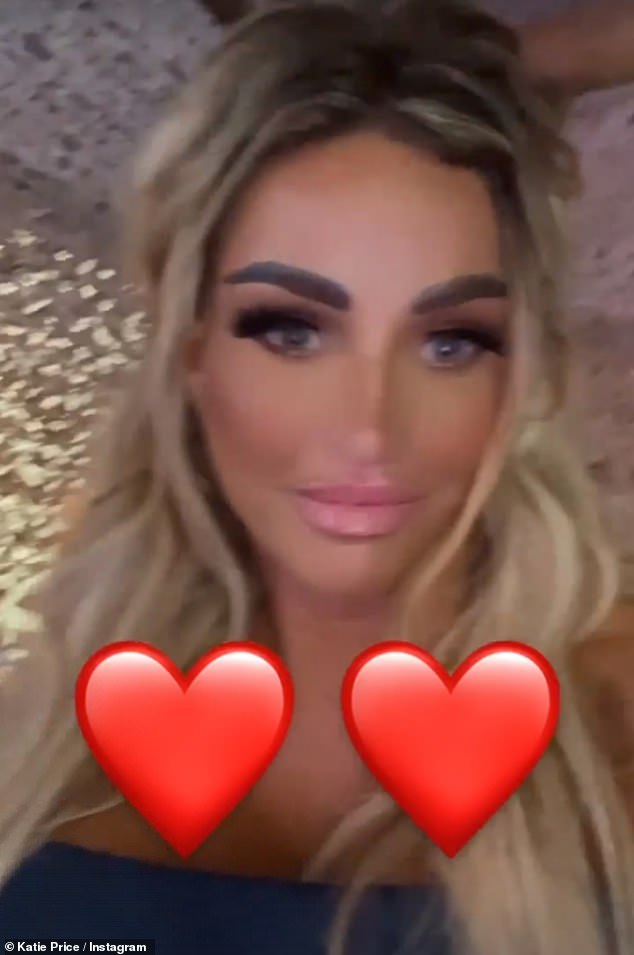 Katie Price acted as bridesmaid at her sister Sophie’s wedding after begging her to bring the ceremony forward ahead of her sentencing for breaching a restraining order.

The former glamor model, 44, took to Instagram on Wednesday to share a glimpse of her sister’s nuptials to Harry Brooks as she appeared to be enjoying the big day.

She looked stunning in an off-the-shoulder blue silk dress as she served as bridesmaid, while accompanied by her children Harvey, Junior, Princess and Bunny.

Celebrations: Katie Price acted as bridesmaid at her sister Sophie’s wedding after begging her to bring the ceremony forward before her sentencing

Katie accentuated her striking features with dramatic false eyelashes and a slick of pink lipstick, as she styled her golden tresses in a half-up, half-down style.

She shared a series of video clips on her Instagram Stories of her children dancing and singing as they appeared to be having the time of their lives at the reception.

A clip showed Katie taking a selfie before walking over to her 14-year-old daughter Princess, who she shares with ex Peter Andre, as she enjoyed a delicious snack.

Another video showed Princess taking to the dance floor with her younger brother Bunny, seven, who Katie shares with her ex Kieran Hayler. 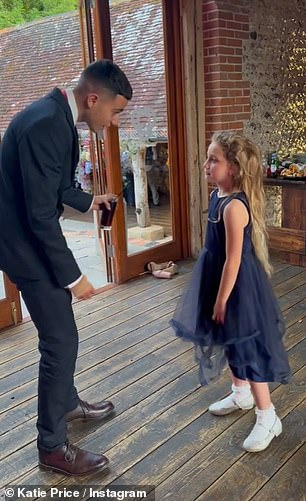 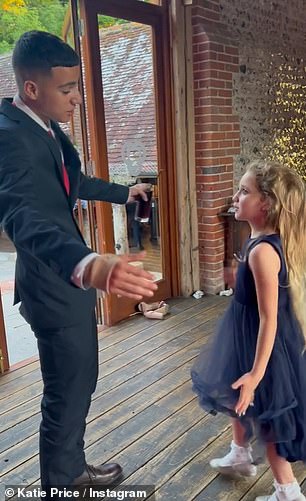 Fun times: She shared video clips on her Instagram Stories of her children dancing and singing as they looked like they were having the time of their lives at the reception 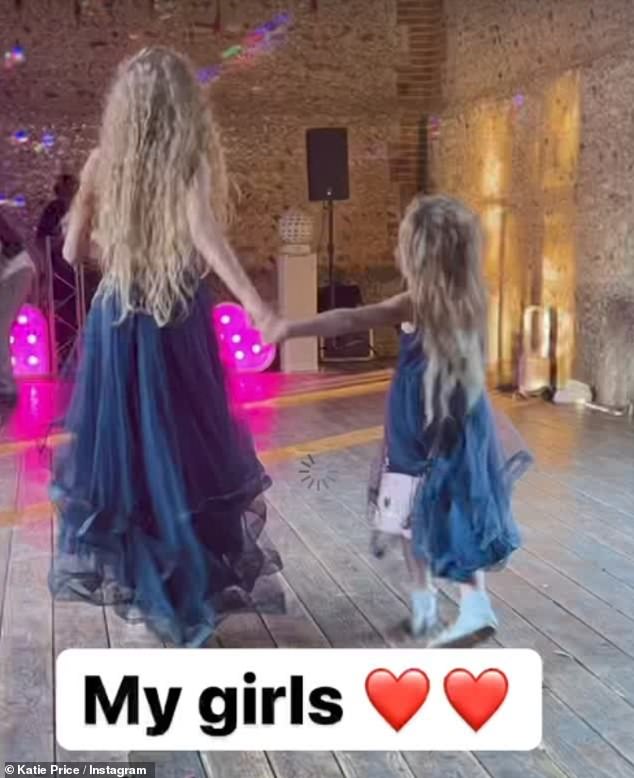 Family: Another video showed Katie’s daughter Princess, 14, on the dance floor with her younger brother Bunny, seven, whom Katie shares with her ex Kieran Hayler

And footage shared to the mother-of-five’s Instagram grid saw her son Junior, 17, dancing and singing along to his debut single Slide with Bunny.

The sweet clip saw the brother and sister nail coordinated dance moves as Junior sang the track, which reached No. 1 on the UK ITunes pop chart.

The preview of Sophie’s wedding comes after it was reported that Katie pleaded with her sister to postpone her nuptials for two days when she was due in court on Friday.

A source told The Sun the “close-knit” family were “desperate” to spend Sophie’s wedding together and moved the ceremony forward after Katie was warned she was facing jail. 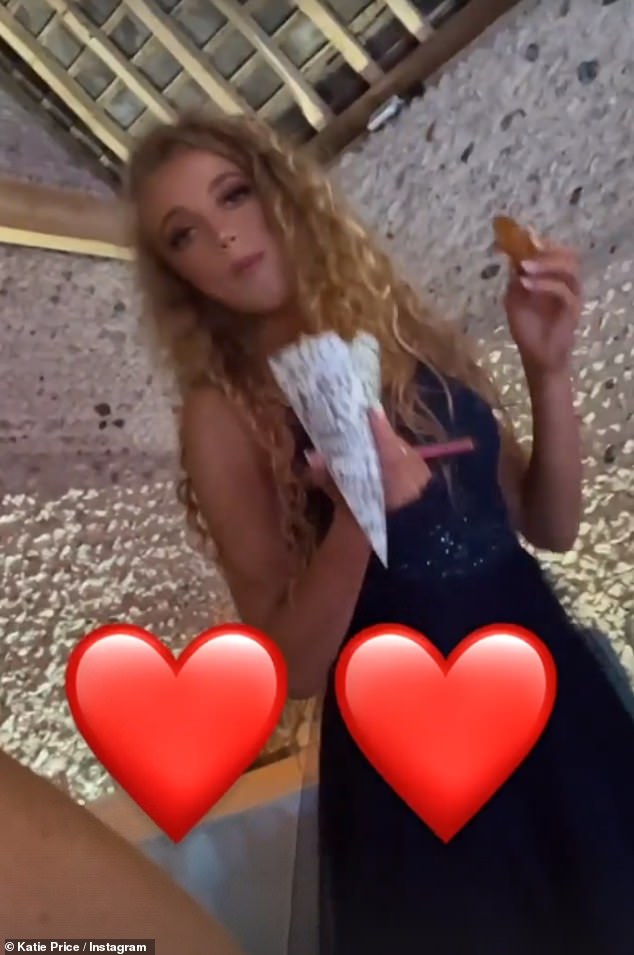 Sweet: A clip showed Katie taking a selfie before walking over to her 14-year-old daughter Princess, who she shares with her ex Peter Andre, as she enjoyed a delicious snack 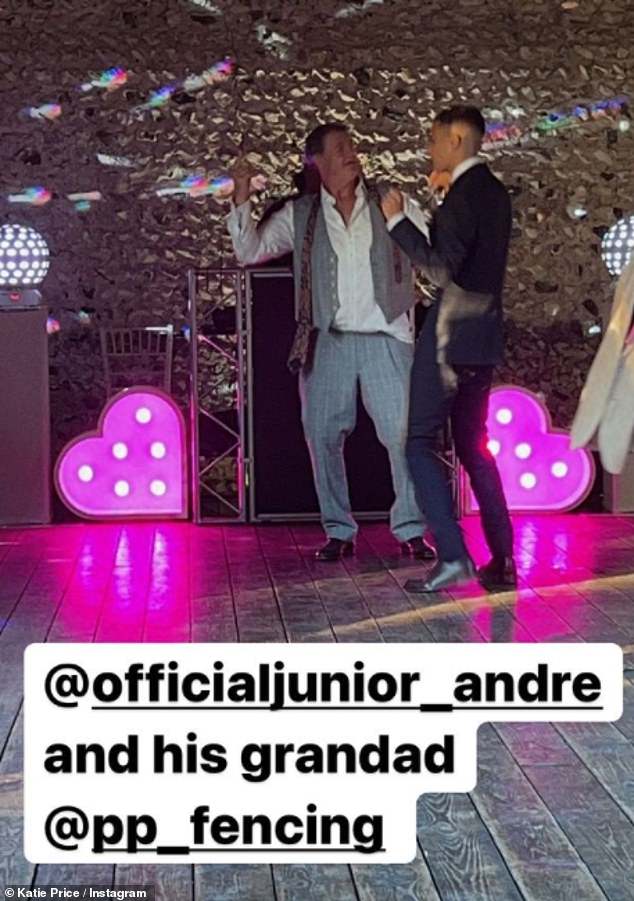 Boogie: Katie also shared a photo of Junior dancing with her grandfather at the reception, which took place in a rustic building with a picturesque outdoor area

They added: ‘[Katie] They looked proud as they arrived at church – smiling for the cameras and nothing like a woman who could be living in a cell in two days.

‘[Katie] even brought a camera crew with her, usually, so she’s obviously not too alarmed.

“But she was keen to be at Sophie’s wedding and they spent some quality time together in the preparation.”

Katie was joined by her children at the wedding, but it was previously reported that her fiancé Carl Woods was not allowed to attend the ceremony. 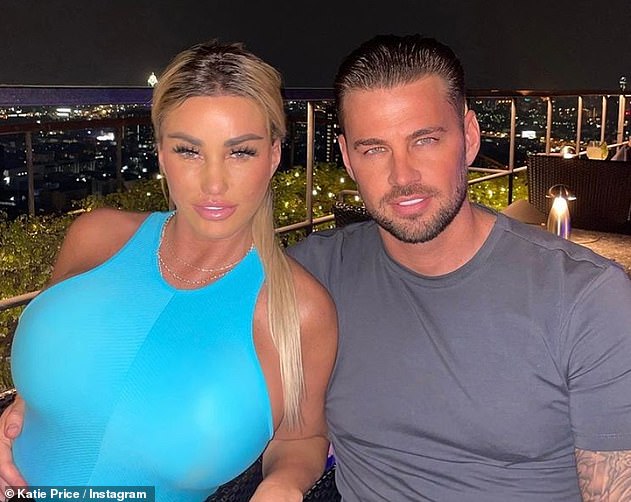 Prohibition: Katie was joined by her children at the wedding but it has already been reported that her fiancé Carl Woods was not allowed to attend the ceremony

Sophie, who got engaged to partner Harry Brooks in March, reportedly declined to include Katie’s fiancé Carl due to his on-and-off relationship with Katie as well as issues with Harry.

According to The Sun, Katie hoped Sophie would let Carl attend after the threatening behavior charges against Carl were dropped.

A source said: “Katie was really hoping Carl could come to the wedding and Sophie would change her mind, but the guest list is already finalized and she is respecting her sister’s wishes.

“She doesn’t want anything to distract from Sophie’s big day and she knows it’s not about her or Carl. Katie will be there with a big smile on her face to celebrate her sister, but of course it makes her sad not to have Carl by her side.

‘As for Carl, he’s disappointed too but more for Katie’s sake. He understands, however, and wishes Sophie and Harry the best on their big day. 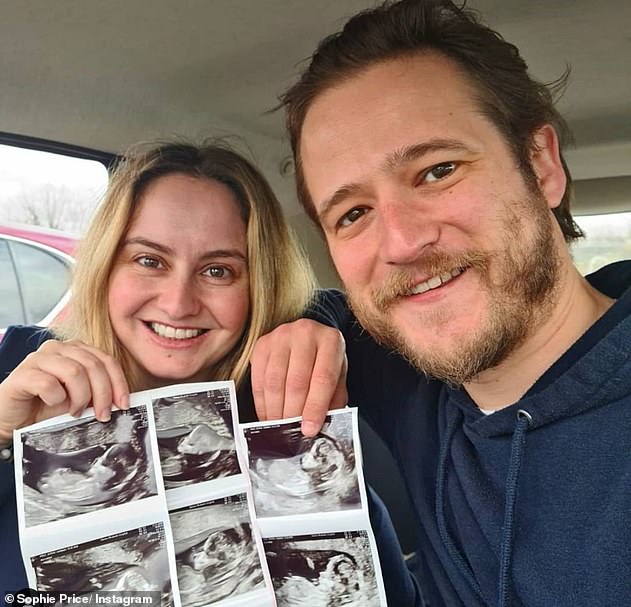 Couple: Sophie and her fiancé Harry Brooks, who have been together for 12 years and got engaged in March, welcomed their son Albert last September

The publication reported that Sophie and Harry tied the knot on Wednesday at a church in West Sussex, not far from Katie’s home.

The post was quickly liked by Katie who posted a string of hearts in the comments section.

Sophie and her fiancé Harry, who have been together for 12 years, welcomed their son Albert last September.

It has previously been claimed that Carl refused to attend the wedding after an argument, with a representative for him saying: ‘Carl will not be attending the wedding’. 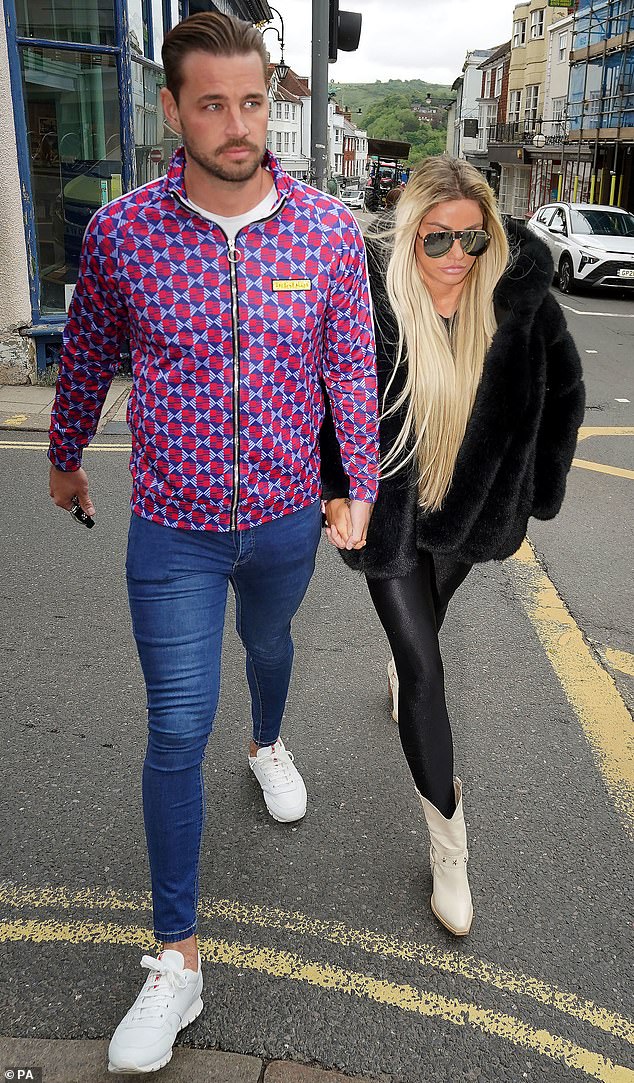 Court: The wedding comes after Katie was warned she could face jail after pleading guilty to breaching a restraining order by calling ex-husband Kieran Hayler’s fiancée a ‘gutter s**g’

“Carl and Sophie’s partner Harry hasn’t always been on board which is why Carl made the decision not to attend.”

The wedding comes after Katie was has warned she faces jail after pleading guilty to breaching a restraining order by calling ex-husband Kieran Hayler’s fiancée a ‘gutter’.

The mother-of-five was arrested on January 21 on suspicion of breaching her restraining order against Michelle Penticost with a rude text to her ex.

“She has a restraining order so shouldn’t try to upset me because she’s in breach and I’m sure she doesn’t want people to know she was having an affair with you behind my back. This gutter shit. 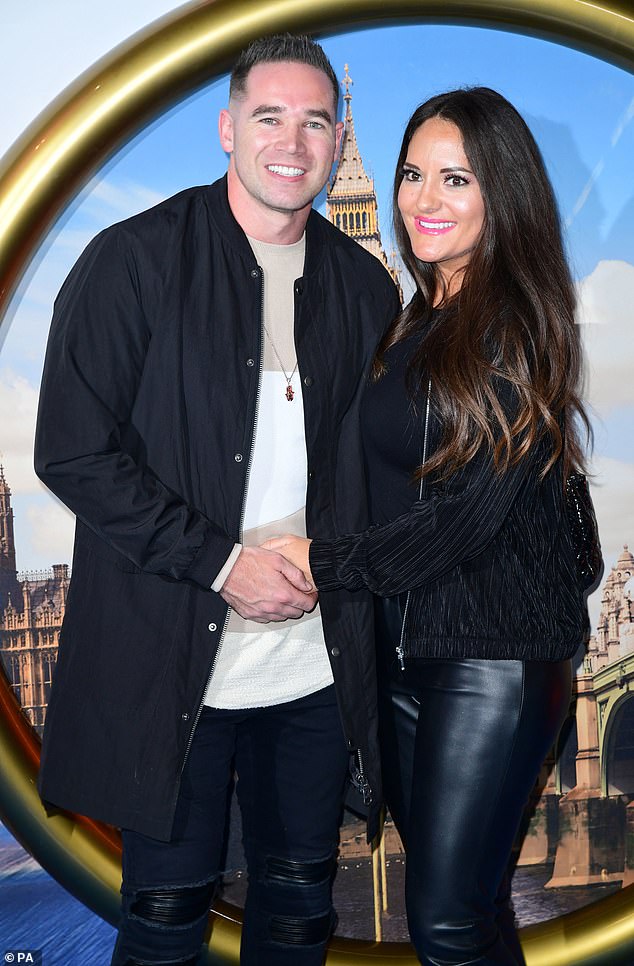 Tension: Katie was arrested on January 21 on suspicion of breaching her restraining order against Michelle Penticost with a rude text to her ex Kieran (both pictured in 2020)

Katie was later charged with breaching a restraining order, but pleaded not guilty on April 27 and requested a trial in Crown Court.

But she pleaded guilty in May and Judge Stephen Mooney told her she “risked receiving an immediate custodial sentence”.

It has previously been suggested that she could face up to five years in prison if she was found to have breached the order.

His lawyer, Nicholas Hamblin, said the star should avoid jail again because only the words “tell it to you” violated the restraining order.

He said, “If it wasn’t for those two words in the message, it wouldn’t be a breach.”

Katie, who was released on bail, will be sentenced for breaching the restraining order on June 24.

She received the five-year restraining order on June 3, 2019, prohibiting her from contacting Michelle directly or indirectly.

The order came after Katie threw a crude ‘abuse tirade’ at him during an argument in a schoolyard. 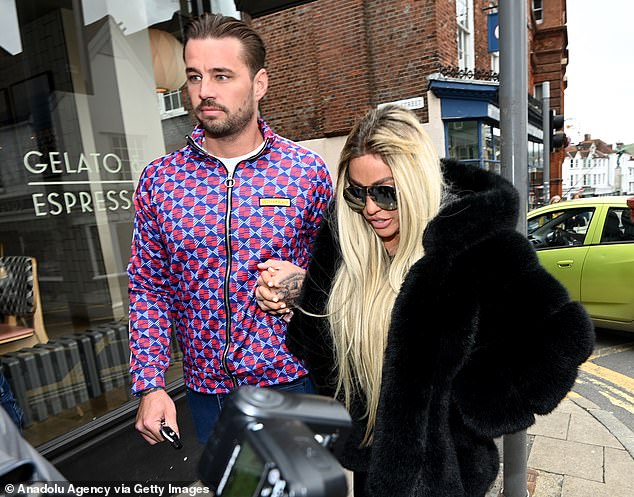 Facing jail: Katie (pictured with Carl in May), who was released on bail, will be sentenced for breaching the restraining order on June 24