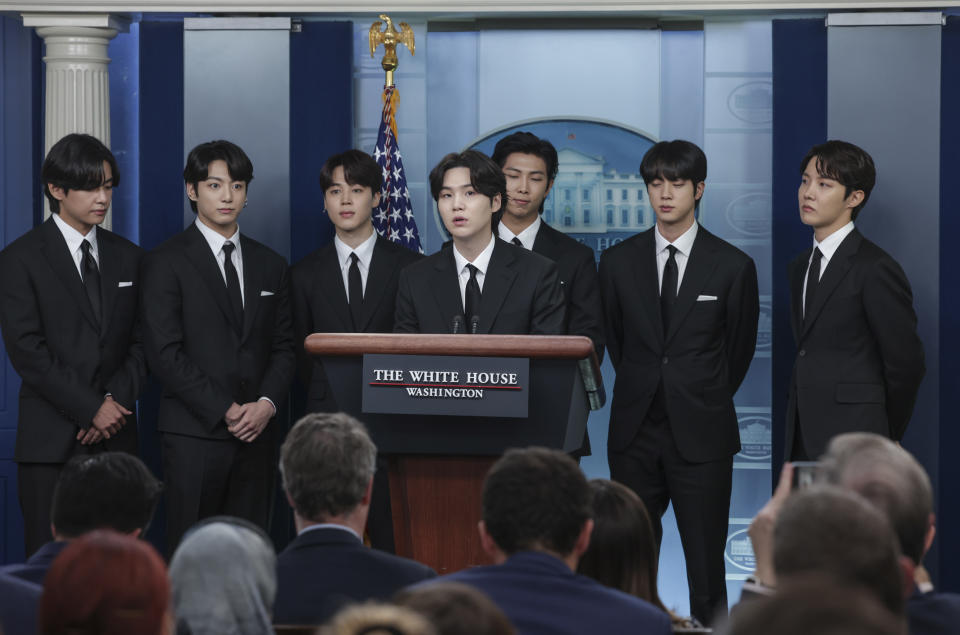 Ahead of their meeting with President Biden in the Oval Office on Tuesday, members of Korean pop supergroup BTS took part in the daily White House briefing with press secretary Karine Jean-Pierre to address rising hate crimes and discrimination against Asians in the United States.

“We have been devastated by the recent wave of hate crimes, including Asian American hate crimes,” Jimin, one of the group’s seven members, said in a statement delivered through an interpreter at the briefing. .

“It’s not bad to be different,” Suga said. “Equality begins when we open up and accept all of our differences.”

“Everyone has their own story,” added Kim Tae-hyung, better known as V. “We hope today is a step forward in respecting and understanding everyone as a person of value. .”

They did not respond to reporters’ questions.

The Grammy-nominated group’s reunion with Biden, as part of the administration’s recognition of Asian American and Native Hawaiian/Pacific Islander (AANHPI) Heritage Month, will be closed to the press.

In a statement announcing their visit, the White House said Biden “has already spoken about his commitment to addressing the surge in anti-Asian hate crimes.” In May 2021, he signed into law the COVID-19 Hate Crimes Act to “provide law enforcement with resources to identify, investigate, and report hate crimes” in Asian American and Native Hawaiian/Pacific Islander communities.

Biden and BTS will also “discuss the importance of diversity and inclusion and BTS’s platform as ambassadors of youth spreading a message of hope and positivity across the world,” added the White House.

The meeting comes days after Biden’s first trip to Asia as president. The visit included a three-day stopover in Seoul, South Korea, where he met newly elected President Yoon Suk-yeol.

Following a spate of anti-Asian hate crimes in the United States in 2021, including the shootings at three Atlanta-area spas where eight people, many of them Asian women, were killed, members of BTS spoke about their own experience of discrimination.

“We remember the times when we were discriminated against as Asians,” the group said in a statement. “We endured swearing for no reason and made fun of how we looked. We were even asked why Asians speak in English. We cannot put into words the pain of becoming the subject of hatred and violence for such a reason.