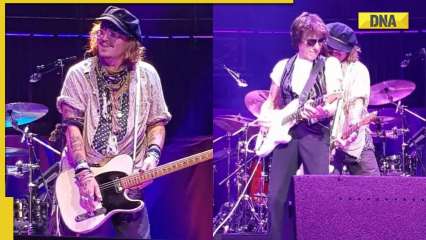 Hollywood actor Johnny Depp, who wanted to be a musician before becoming an actor, has returned to his musical roots. Two days after the lawyers delivered their closing arguments in his defamation lawsuit against his ex-wife Amber Heard, the actor made a surprise appearance at Jeff Beck’s concert in England.

According to The Hollywood Reporter, in several social media posts and videos shared online, the actor surprised fans at a Jeff Beck concert in England on Sunday. At the show, which took place in Sheffield, Depp took to the stage with his guitar alongside Beck to perform their 2020 collaboration “Isolation,” a remake of John Lennon’s 1970 song, according to The Hollywood Reporter.

They also performed a cover of Marvin Gaye’s “What’s Going On” and Jimi Hendrix’s “Little Wing”.

For the uninitiated, Johnny wanted to become a musician. He even testified to his early musical aspirations at the helm, noting that he wasn’t having as much success as he wanted, which prompted him to turn to acting.

According to The Hollywood Reporter, Depp and Heard have been in Fairfax, Va., District Court since April 11, each testifying; he went to jury deliberation on Friday.

Earlier, Elon Musk, Tesla CEO and ex-boyfriend Amber Heard took to Twitter, saying he hopes “they move on” and that the two celebs are “incredible” at “their best”. Responding to a tweet about Johnny Depp and Amber Heard’s On Trial, Elon said, “I hope they both move on. At best they’re all amazing.”

Elon Musk and Amber Heard had a brief relationship after splitting from Johnny Depp. Musk and Heard split in 2017 after a year of dating. However, the couple rekindled their love in 2018 but called it quits after a few months.

See also  Nick Jonas Says Priyanka Chopra Was His 'Rock' on New Parenthood: 'Grateful to Have a Cast Member'

On the contrary, the Pirates of the Caribbean Star had another version. He claimed in a lawsuit that Heard and Musk began dating “less than a month after getting married” in February 2015.

In 2018, Depp filed a lawsuit against Heard for her Washington Post op-ed about her becoming a victim of domestic violence. Although she never mentioned Depp, the actor’s attorneys say it hurt his career and reputation. (With ANI entries)