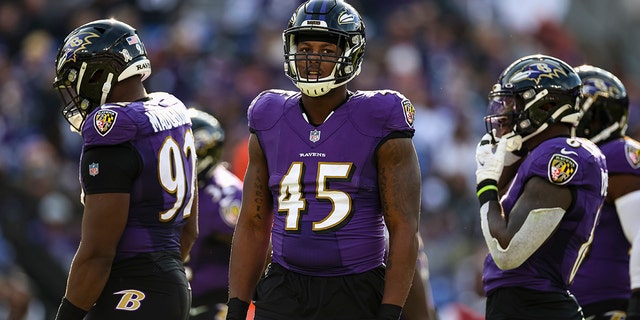 The family of Baltimore Ravens linebacker Jaylon Ferguson released a statement Thursday to quash rumors about the cause of his death.

It came as TMZ Sports reported, citing Baltimore police, that “investigators are not ruling out the possibility of an overdose.”

Jaylon Ferguson (45) of the Baltimore Ravens looks on during the first half at M and T Bank Stadium on November 7, 2021 in Baltimore.
(Scott Taetsch/Getty Images)

“It is with deep sadness that we announce the unexpected passing of our beloved Jaylon Ferguson. Jaylon was a loving father, son, brother, fiancé and exceptional athlete. His kindness, big heart and personality contagious will be missed by so many, but his legacy will continue. We wholeheartedly appreciate the calls, texts and messages of support from his many friends and fans after learning of his tragedy,” the statement began.

“Despite speculation in previous reports, at this point the case of Jaylon’s death has yet to be determined. This is one of the darkest times of our lives and we are still in complete shock. We ask that you please respect our privacy as we go through this difficult time.

“Again, thank you all for the love shown and a special thank you to the Baltimore Ravens and Louisiana Tech University.”

Ferguson’s death was announced on Wednesday. He was 26 years old.

“We are deeply saddened by the tragic passing of Jaylon Ferguson,” the team said. “He was a kind and respectful young man with a big smile and an infectious personality.

“We express our sincere condolences to Jaylon’s family and friends as we mourn a life lost far too soon.”

Baltimore Ravens linebacker Jaylon Ferguson during a game between the Cincinnati Bengals and Baltimore Ravens on Dec. 26, 2021, at Paul Brown Stadium in Cincinnati.
(Robin Alam/Icon Sportswire via Getty Images)

“It is with great sadness that we announce the passing of LB Jaylon Ferguson of the Baltimore Ravens. The family asks for your prayers and privacy during this difficult time,” Lawson said.

“Jaylon was a sweet, generous person who loved his family and his team,” Ravens coach John Harbaugh said in a statement. “It was a pleasure to talk with him and be with him every day. You always wanted to see and talk to ‘Ferg’. Our prayers and help go out to his family. Our hearts are with his Spirit. RIP , Jaylon.”

Ravens linebacker Tyrus Bowser added: “Me and ‘Ferg’ went through some of the same struggles when it came to making a name for ourselves in the league. From there, we were able to gain an understanding and help each other to build and grow as players.

“From the playbook to the field — and even outside of work — we have created a strong bond between us. Whether I was having a bad day or vice versa, we encouraged each other, and that’s what I appreciated the most and what I will miss. His positive energy, his encouragement and his confidence in me helped me to become the player and the man that I am today. He will be missed but NEVER forgotten. Keep calm, 45 years old.”

The Ravens selected Ferguson in the third round of the 2019 NFL Draft against Louisiana Tech. He played in 14 games during his rookie season and had 31 tackles, 2.5 sacks and a fumble recovery.

Ferguson was a standout linebacker at Louisiana Tech. He was named the 2018 Conference USA Defensive Player of the Year and was selected to the All-Conference First Team in 2017 and 2018.

He recorded the most sacks in NCAA FBS history with 45.

Ryan Gaydos is the sportswriter for TAUT News and TAUT Business. Story tips can be sent to [email protected]