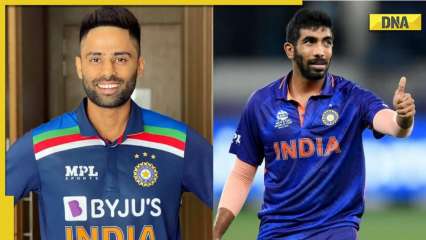 Indian batter Suryakumar Yadav confirmed on Thursday that pacesetter Jasprit Bumrah is fit and ready to play the second T20 of the three-game series against Australia.

READ: Roger Federer’s Final Tournament: When and Where to Watch Laver Cup Live?, know all the details

At the pre-match press conference on the eve of the second T20 with Australia, Suryakumar shed light on the pacer’s condition. Bumrah was not part of the playing eleven for the first T20 in Mohali. Bumrah had been sidelined with injury and had undergone rehabilitation at the National Cricket Academy (NCA) before being selected for the Australian Series and World Cup squad.

“Bumrah is fit and ready to play in the second match,” Suryakumar said. The second T20I against Australia will be held in Nagpur on Friday. Suryakumar credited the Australian team for their at bat in the first T20I, saying there was a dew factor.

“We didn’t sit down to really discuss bowling performance, but as you saw in the last game, the game went to the last and there was a lot of dew. The Aussies also hit beautifully, credit to them. We try our best,” he said.

Suryakumar also explained Rohit’s animated gestures on the pitch and said such incidents are necessary to keep the pressure off. “There is a lot of pressure on the field, so normalizing the situation takes a little laughter. Such chatter is necessary,” the batter explained.

He defended the team’s attacking approach, saying: “Assessing the field is very important. Everyone knows their responsibility and roles in the team. Openers know their role. After the openers, the middle class knows their role. Everything is going well. We will try to do the same again.

“The batter explained his hitting style and said: “I have a very flexible hitting power, I plan for every situation. The preparations have gone very well. Everyone plays their part very well and when I come to play, I fulfill my part.”

Defending the performance of bowlers Bhuvneshwar Kumar and Harshal Patel, the batter said the bowlers’ slower balls are still deceptive and not easy to get. let’s give him some slack.”