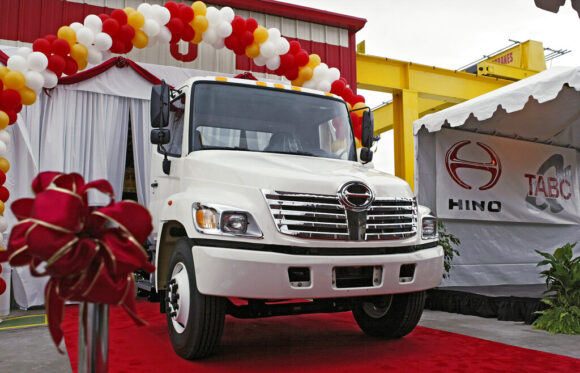 TOKYO (TAUT) — Hino Motors, a truck manufacturer that is part of the Toyota group, has systematically falsified emissions data dating back to 2003, according to the results of a study released Tuesday.

President Satoshi Ogiso bowed at a hastily convened press conference and apologized to customers and other stakeholders.

“I’m so sorry,” he said. “Unfortunately, misconduct had been committed for a wide variety of models.”

Teams developing engines knew they could not meet the targets and felt so pressured that they falsified test results, Ogiso said. That led to more deception as workers covered up their wrongdoings. It is believed there are no safety concerns involved, Ogiso said.

Hino admitted in March that it had falsified data on government-required tests on emissions and mileage. A group of external experts has been set up to investigate the matter.

In a 17-page report, it blamed an “inward-looking and conservative culture” at the company that led to a lack of employee engagement and solidarity.

Hino said it is taking the findings seriously and will come up with measures to prevent recurrence, including establishing a proper auditing system, revising rules and strengthening corporate culture.

Ogiso pledged to train Hino’s staff and foster a more open corporate culture and a good work ethic, emphasizing that the problem was for the entire company, not just the teams in question.

“I am committed to ensuring that we are reborn, and we are executing that in clear action,” said Ogiso, who previously worked at Toyota Motor Corp., Japan’s largest automaker.

The misconduct uncovered included altering emissions durability tests on a wide range of models and tampering with fuel economy information in heavy-duty engines.

Hino has recalled 67,000 vehicles in Japan over the incorrect data. How Hino’s financial results will be affected by the latest disclosure is still unclear, Ogiso said. Affected vehicles could contain a total of nearly 300,000 vehicles, according to Hino.

Whether he, as well as past executives, will step down to assume responsibility will be decided later after a full review of the scandal, he said.

Toyota Chief Executive Akio Toyoda passed on a message, read by Ogiso at the press conference.

“The misdeeds at Hino have violated the trust of customers and other stakeholders. I deeply regret what happened,” Toyoda said in the message.

With regard to models sold abroad, Hino said it was cooperating with investigations by authorities in the US and Europe.

Hino produces vehicles sold under the Toyota brand, including the Land Cruiser Prado sports car, in addition to Hino trucks. Hino has notified the Japanese government of the findings. Hino shares fell 10% in Tokyo on Tuesday. Toyota sank 2.6%.

The scandal at Hino, which is 50.1% owned by Toyota, is the latest scandal to have turned out to be an embarrassment to a country that prides itself on a reputation for discipline, craftsmanship and attention to detail.

In 2018, Japanese prosecutors charged major steelmaker Kobe Steel with massive, years-long falsification of information on a wide variety of products sent to more than 680 companies, including aluminum castings and copper tubing for cars, planes, appliances and trains.

In 2015, an investigation into Mitsubishi Motors Corp. extensive mileage fraud for 25 years. The automaker had admitted in the early 2000s that it had covered up vehicle defects such as failing brakes, faulty clutches and unsafely installed fuel tanks. That misconduct had begun in the 1970s.

TAUT reporter Yuri Kageyama is on Twitter at https://twitter.com/yurikageyama

Photo: The first Hino truck to be assembled in North America was unveiled on Tuesday, October 19, 2004 at Toyota’s longest-running US manufacturing facility, TABC Inc., in Long Beach, California. Hino Motors, a truck manufacturer that is part of the According to a special investigation released Tuesday, Aug. 2, 2022, the Toyota group has systematically falsified emissions data, which date back to 2003. Photo credit: TAUT Photo/Damian Dovarganes, File.

Copyright 2022 The AU Times. All rights reserved. This material may not be published, broadcast, rewritten or redistributed.

Much of the country will be baked below 125 degrees in the coming decades, reports show