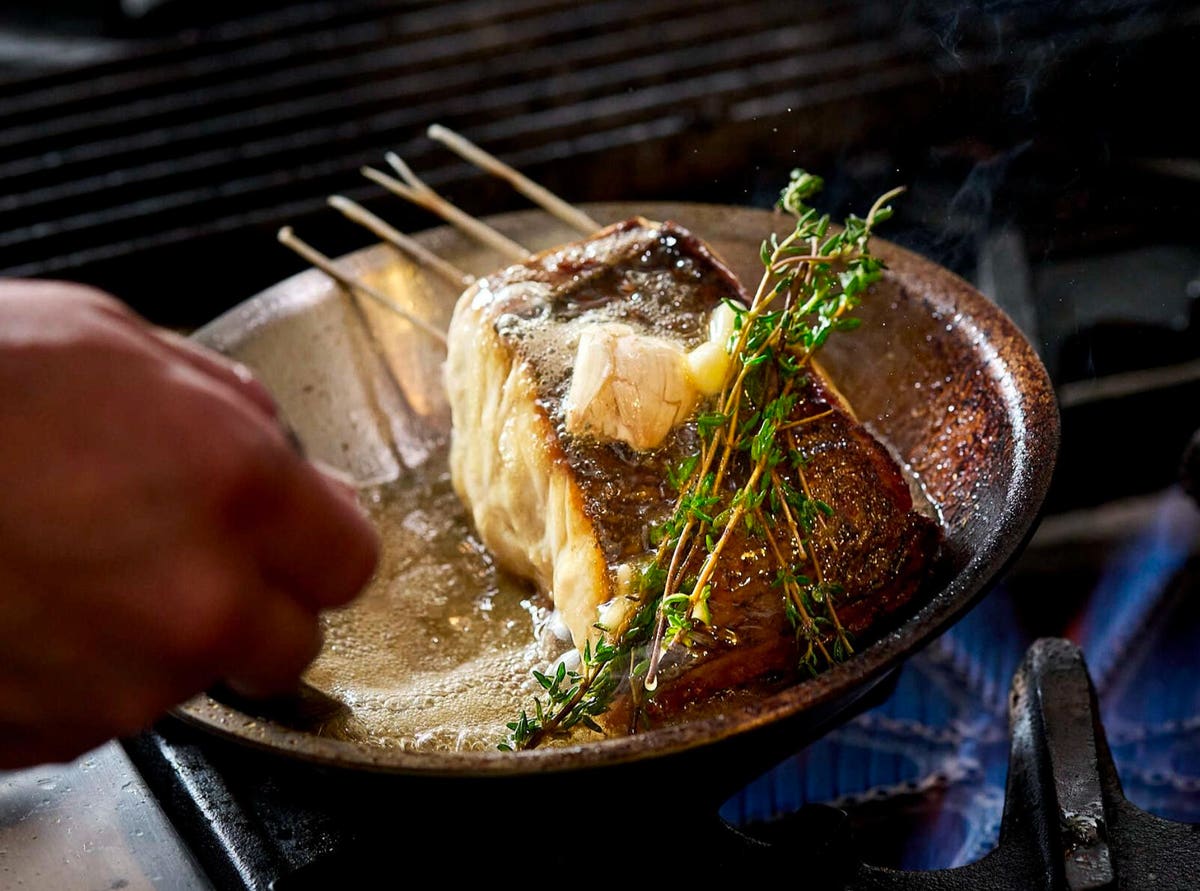 Italian for ‘anchor’ Ancora tries to connect local restaurants and fishermen and women so that with direct access to the San Francisco harbor, Chef Anichini can source freshly caught fish for Ancora’s daily changing menu.

“Ancora’s partnership with Water2Table is unlike any other seafood restaurant in the city. We can buy seafood directly from local fishermen and women, allowing us to prepare the fish caught that morning in the restaurant the same evening,” said Chef Nick Anichini. “We are so proud to be a part of San Francisco’s incredible seafood scene and in such great company, from Angler to Le Fantastique and landmarks such as Portofino and Scoma’s.”

Diners can choose from a selection of seafood caught that day, with an emphasis on common varieties typical of the California coast, such as the roasted halibut rack with preserved porcinis and chermoula and anchovy pan con tomate. Other highlights include spot shrimp with sea urchin butter and plankton tagliolini with white sturgeon caviar.

We spoke to Executive Chef Nick Anichini about the opening of this restaurant, his relationship with Water2Table, the inspiration for Ancora and more. This is what he had to say.

Talk about your relationship with Water2Table and how that relationship started at your previous job as chef de cuisine at Atelier Crenn.

I’ve been working with Water2Table for years, ever since I started working in restaurants in San Francisco. We have always had a good relationship and I got to know Water2Table owners Joe and Andi Conte through their supply relationship with Atelier Crenn where I was chef de cuisine. When they approached me with the idea of ​​a restaurant that would showcase our shared commitment to hyper-local fish and passion for seafood, we shared a similar vision of what that could look like, and that vision became Ancora.

Do you work with other regional partners? If so, with whom and what is the partnership?

I have strong relationships with other fish suppliers, but working with Water2Table is our priority. Joe and Andi are constantly supplying incredible quality fish to great chefs all over the bay. We also source our products from local farms such as Tierra Farm, Heirloom Organics, Dirty Girl, Fully Belly Farms and Blossom Bluff, just to name a few. It really comes down to the access our kitchen has through Water2Table and the abundance of produce growing in Northern California.

How did you arrive at the vision at Ancora? What was the catalyst in you to open this luxury seafood restaurant on your own?

I’ve always wanted to open a seafood restaurant that focused on making it easy for people to interact with food. The only thing missing from my plan was a direct connection to the boats, and coincidentally, when Joe reached out about opening a restaurant, we had almost the exact same exact vision for what that restaurant would look like. We both wanted to emphasize great food, especially seafood, where guests could choose their own adventure through the menu.

What is the inspiration for the menu? What would you call this kitchen? What are some fan favorite dishes?

The menu has a strong seafood focus, based on fish and produce that is local and in season. We wanted to return to the art of cooking – from fire to pan, glaze, sear – where we were inspired by natural flavors and let the ingredients define each dish. Our inspiration is always to treat the product well and make it as tasty as possible without too much fluff.

The halibut rack is a dish we opened the restaurant with and is still popular with guests. It’s the perfect example of the “choose your own adventure” mentality we’ve been working on, with all the ingredients that go with the halibut: the grilled garlic bread, the sausage, and the pepperonata. The Plankton Tagliolini with caviar is another fan favorite, where we incorporate plankton from Veta la Palma, an aquaculture facility in southern Spain, into the eggs used to make the tagliolini, then top it off with heaps of white sturgeon caviar and bottarga .

What distinguishes seafood native to the San Francisco Bay and the California coast?

I like the oysters the most. Bay Area oysters have a distinct fruitiness that you don’t get from the classic East Coast briny oysters. Black cod is also something unique on the west coast. I could never get it when I lived in Chicago, so it’s exciting to be able to cook it now, and the same goes for Pacific halibut. That’s the beauty of Ancora’s menu and mission: we want what we serve to be as local as possible.

How has the reception been since the opening in July? What do you hope the next year has in store for Ancora?

The restaurant has been very well received so far. We are busy with great reviews coming in from diners. It means a lot to our team to see industry guests come in to enjoy our food. We’re lucky to be where we want to be and plan to keep the momentum going.

See also  3 of our major tech companies are holding events this week. This is what we are looking for