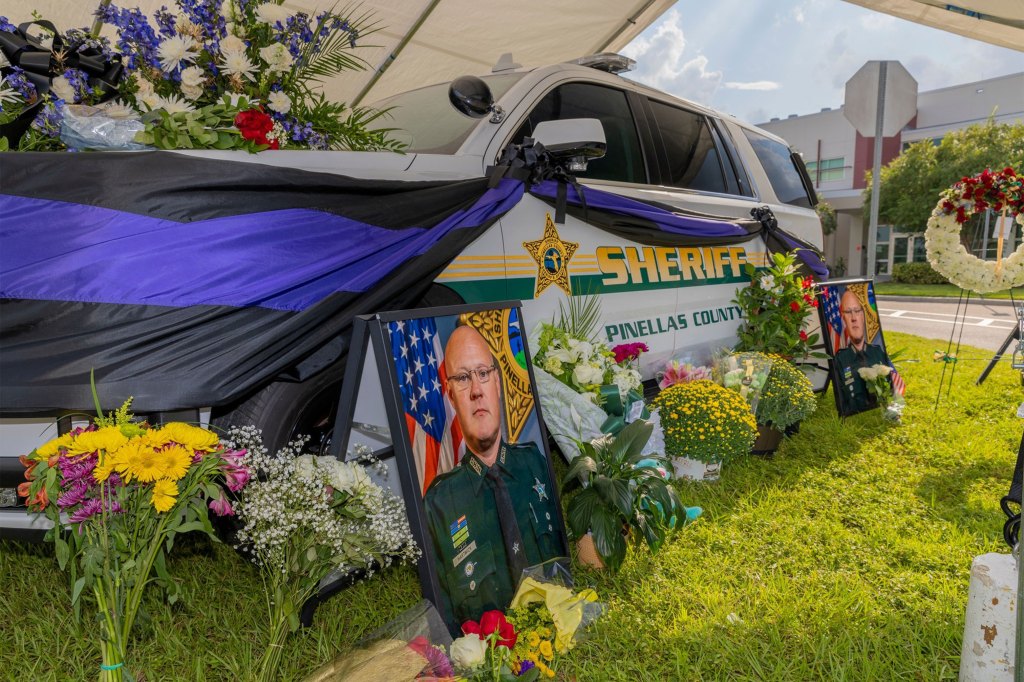 An illegal migrant operating a front-end loader allegedly beat and killed a Florida veteran before fleeing the crime scene on Thursday night — sparking a frantic manhunt that ended in the suspect’s arrest.

The fatal accident occurred when Pinellas County deputy sheriff Mike Hartwick was clearing traffic at a construction site along I-275 at around 10:40 p.m., Sheriff Bob Gualtieri told reporters at a news conference Friday.

“This man we have in custody is illegal here and he fled, as he said, because he got scared after he killed the deputy,” Gualtieri said.

Dashcam footage from Hartwick’s police car shows the deputy leaving his vehicle about a minute after arriving at the crime scene before walking to the verge next to where he had blocked lanes, the sheriff said.

Moments later, the construction vehicle can be seen passing in front of the camera and then hitting Hartwick as it travels at about 20 miles per hour.

Hartwick, a 19-year veteran of the Pinellas County Sheriff’s Office, was pronounced dead at the scene.

The front-end loader — used to move concrete barriers on job sites — was operated by a construction worker at the site, later identified as 32-year-old Juan Ariel Molina-Salles, police said.

Molina-Salles continued to drive the loader after he allegedly hit the deputy. He made it a quarter of a mile away from the scene before finally stopping.

While he was driving, he called a colleague on the phone “crying” and “not making sense,” telling him he “just killed a deputy,” Gualtieri said. Molina-Salles handed the colleague his construction vest and helmet and told him to hide them before fleeing on foot.

The colleague, identified as 31-year-old Elieser Aureilio Gomez-Zelaya, is said to have hidden the vest and helmet in a nearby forest.

After a nine-hour manhunt that involved three K-9 helicopters and hundreds of law enforcement officers, Molina-Salles was found hiding in the undergrowth by deputies from the Pasco County Sheriff’s Office.

Police said K9s recovered the hidden vest and helmet, which bloodhounds then used to pick up the scent of Molina-Salles and locate him.

During his flight, officers said he contacted his roommate – who is also an illegal migrant – asking to pick him up in his car, police said. But the roommate turned when he saw the massive police response in the area.

Molina-Salles’ was arrested and charged with leaving the scene of a fatal accident. Gomez-Zelaya was also charged with complicity in the crime. Both have been transferred to the Pinellas County Jail.

Molina-Salles originally gave police the false name Victor Vasquez-Real and said he was 35 years old. Researchers later found out that “that was a bunch of crap,” Gualtieri said.

According to the sheriff’s office, Molina-Salles illegally entered the country in October 2021 at Eagle Pass, TX — a hotspot for migrants crossing the southern border — but was turned around by CBP and sent back to Mexico.

There was no further evidence that he entered the country when he was arrested on Friday. He told police he had been in the Tampa Bay area since March this year.

According to Gualtieri, many of the construction workers at the site were determined to be illegal migrants as well. Most of them lied or gave false information to deputies, which he said hampered the investigation.

“This company employs a bunch of illegal aliens and they’re all lying and giving us fake names, fake IDs, a bunch of fake IDs from North Carolina that really frustrated this investigation,” the sheriff said.

Gualtieri said Molina-Salles had provided the construction company with false ID and said he had previously worked in Honduras.

The workers were employed by Archer Western, a Tampa-based contractor that does work for the Florida Department of Transportation.

The office of Florida Governor Ron DeSantis told Fox13 in a statement that it was investigating the matter to determine if more illegal immigrants had used fraudulent information to get work in the state.

He promised to continue to relocate illegal immigrants from the Sunshine State.

“If this person’s illegal status played a part in his decision to cover up this incident, it only underscores one of the drawbacks our state faces because of the federal government’s open borders policy. The state of Florida is not a refuge and illegal immigrants are not allowed to work here. For reasons like this, we will continue our legal efforts to ban and relocate illegal immigrants.”

On Friday afternoon, PCSO escorted Police Deputy Hartwick to a funeral home in Tarpon Springs. Hartwick is survived by his mother and two children.