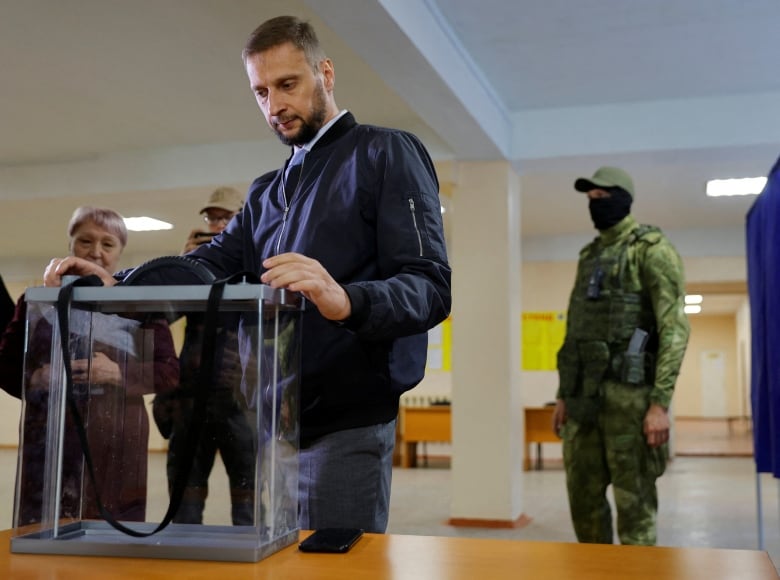 People in four occupied regions of southern and eastern Ukraine will vote on whether or not to join Russia in the coming days, in referendums that Western governments and election experts described as a sham.

Separatists and Moscow-backed officials announced earlier this week that voting will be held Friday through Tuesday in four provinces: Luhansk, Donetsk, Kherson and Zaporizhzhya. They claim to have broad public support for joining Russia.

The referendums coincided with Russian President Vladimir Putin announcing the mobilization of some 300,000 reservists and threatening nuclear retaliation for any strikes on Russian soil amid battlefield setbacks against a Ukrainian counter-offensive.

Here’s a look at what the referendums entail and their potential implications:

Why are the referendums taking place?

Separatists who have controlled large parts of the separatist regions of Luhansk and Donetsk in Ukraine’s Donbas since 2014 have long pushed for accession to Russia and have shown little tolerance for dissent.

Earlier in the summer, when the Kremlin hoped for a quick conquest of the entire Donbas region, local officials talked about holding referendums in September, but amid the slow pace of Russia’s offensive to the east, officials in Moscow spoke out. on postponing the votes until November . The Kremlin’s plans changed again after a lightning-fast Ukrainian counter-offensive this month.

Experts see the referenda, which will take place on a few days’ notice, as a Russian propaganda tool to bolster public support at a time when its troops are struggling to hold their own in Ukraine.

“[Russia] we don’t care if we say their referendums are a sham… [Russian] population still largely buys in what happens. That could change with this conscription,” said Professor Robert Austin of the University of Toronto’s Munk School of Global Affairs and Public Policy.

Annexing those regions would also give Russia the chance to claim self-defense and retaliate vigorously against any Ukrainian counter-offensive there. Earlier this week, Putin threatened to use nuclear weapons to defend Russian territory.

“They will say [it’s self-defence]but no one in the world will believe that,” said Borys Wrzesnewskyj, a former Canadian Liberal MP who heads the Human Rights Commission of the Ukrainian World Congress.

Will the votes be legit?

The referenda are illegal under both international and Ukrainian law, including violations of the United Nations Charter.

“It’s a means of forcibly acquiring territory, and that’s illegal,” said Professor Marc Weller, who holds the chair of international law and international constitutional studies at the University of Cambridge in the UK.

Observers expect the outcome of the votes to be pre-determined by the Kremlin, with officials expected to announce that voters in every region are overwhelmingly in favor of joining Russia.

“The people on the ground are instructed to deliver a certain percentage… Whether it’s 97 or 95 percent, [Putin] will certainly tell whoever is conducting the referendum what outcome he is looking for,” Austin said.

The referendums will take place without independent observers and there is a lack of transparency about who gets to vote and under what conditions.

Former Canadian election chief Jean-Pierre Kingsley, who previously led international election observation missions in Iraq, Haiti and other countries, said the referendum process lacks several essential elements: an independent authority in charge, rules of conduct and enforcement, and sufficient time and information for voters to understand what the referendums are about.

“I wouldn’t look for those things in the upcoming referendums, just as I didn’t in Crimea,” Kingsley said, referring to a hastily organized vote in 2014 in Ukraine’s Crimean region on whether or not to join Russia.

Wrzesnewskyj described the vote as “literally a referendum under fire”.

“In a place that has been bombed, shot at, where your neighbors have been killed, disappeared, tortured, and a so-called Russian election official shows up with a soldier with a Kalashnikov and tells you to fill out a ballot paper and vote, how would you vote? vote to save your life.”

It is unlikely that people from those regions who have been displaced, fought on the front lines or were forcibly transferred to Russian territory are involved in the vote.

Will Russia Face Consequences Over Referenda?

Many Western leaders, including Prime Minister Justin Trudeau and US President Joe Biden, have denounced the referendums as a sham and said their countries would not recognize the results.

However, it is not clear what further action they could take against Russia, given the massive amount of sanctions already in place since the start of the war in February.

Canada denounces Russia’s planned “referendums” in the occupied territories of Ukraine. We will never recognize them. This is a blatant violation of international law. It is a further escalation of war. And it is unacceptable.

Ukrainian President Volodymyr Zelenskyy has called on the United Nations to remove Russia’s veto power in the UN Security Council.

In 2014, Russia was expelled from the G8 and sanctioned by many countries after sending troops to Crimea and holding a referendum in which 97 percent of voters claimed it supported Russia’s accession.

Moscow used that vote as a justification for annexing the Black Sea peninsula, in a move unrecognized by most of the world. The vote was held under the close watch of Russian troops shortly after they overtook the region.

What is the current situation in voting areas?

Weeks after the annexation of Crimea, Luhansk and Donetsk declared their independence from Ukraine, sparking eight years of fighting that eventually led to Putin launching an invasion in February, ostensibly to protect their residents.

Since then, Russian forces and local separatist forces have taken control of virtually the entire Luhansk region, but only about 60 percent of Donetsk.

In the southern regions where referendums are held, anti-Russian sentiment is strong. Hundreds of pro-Kiev activists have been arrested, and many claim they have been tortured. Others were forcibly deported and tens of thousands displaced.

How does this relate to Putin’s mobilization, nuclear threats?

A day after the referendums were announced, Putin ordered a partial mobilization of about 300,000 reservists to bolster his forces in Ukraine, and also stated that he was willing to use nuclear weapons to fend off any attacks on Russian territory.

Observers noted that Putin’s decree is broad enough to allow the military to further expand numbers if necessary. Some reports suggest that the Kremlin’s goal is to amass a million men.

Dmitry Medvedev, deputy head of the Russian Security Council chaired by Putin, reinforced the president’s threat on Thursday by saying that after absorbing the four Ukrainian regions, Moscow could use “all Russian weapons, including strategic nuclear weapons,” to to defend them.