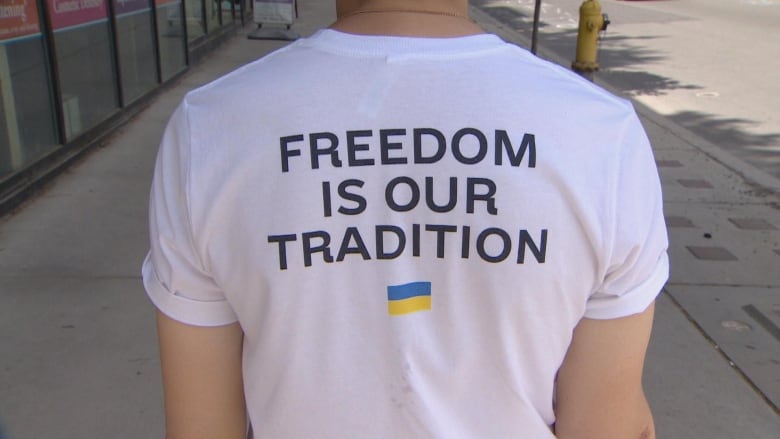 When Andrew Kushnir first came out as gay, he said he “felt like a unicorn”. Now, years later, he has the honor of walking for the countless LGBTQ Ukrainians unable to take to the streets as war rages in their country.

It’s a moment he never thought possible when he was growing up. The feeling at the time, he says, was that there was no such thing as a “queer Ukrainian”.

This perception changed when he had the chance to visit Ukraine for the first time, meeting so many people like him.

“They made me realize that I don’t have to choose between the two. I can be both. That’s their gift to me,” Kushnir said.

“My turn to intervene for them”

That’s why, when Russia invaded Ukraine in February, Kushnir knew he had to do something to repay that gift.

“It was my turn to step in for them.”

An artist and activist, Kushnir is also the founder of the LGBTQ Ukraine Fund, an organization that raises money for advocacy and humanitarian groups in that country. When his band announced they would be taking part in the Pride Parade on Sunday, he said he was lucky enough to do so.

Homophobia and transphobia on the rise, lawyer says

Kyiv Pride’s Lenny Emson reached out and asked if Kushnir would march on behalf of Ukraine’s LGBTQ community.

“We called on the prides of the world to defend ourselves,” Emson told TAUT News.

“We’re not just kind of victims of Russian aggression as Ukrainians. We’re kind of under a more definite threat as LGBTQ people,” Emson said.

“On the other hand, we are currently seeing an increase in hate crimes in Ukraine due to homophobes and transphobes who are currently using this situation … to stalk the most visible members of the community.”

As part of the aid effort, Kushnir’s organization is selling a T-shirt he says was designed by an all-LGBTQ Ukrainian team, featuring a traditional vyshvanka design on the front and a special message on the back “Freedom is our tradition. “

And as for how he’ll feel walking as an LBGTQ Ukrainian to support so many like him, Kushnir says, “I think I’m going to be very, very emotional.”

“I think my heart is going to explode, to be honest.”