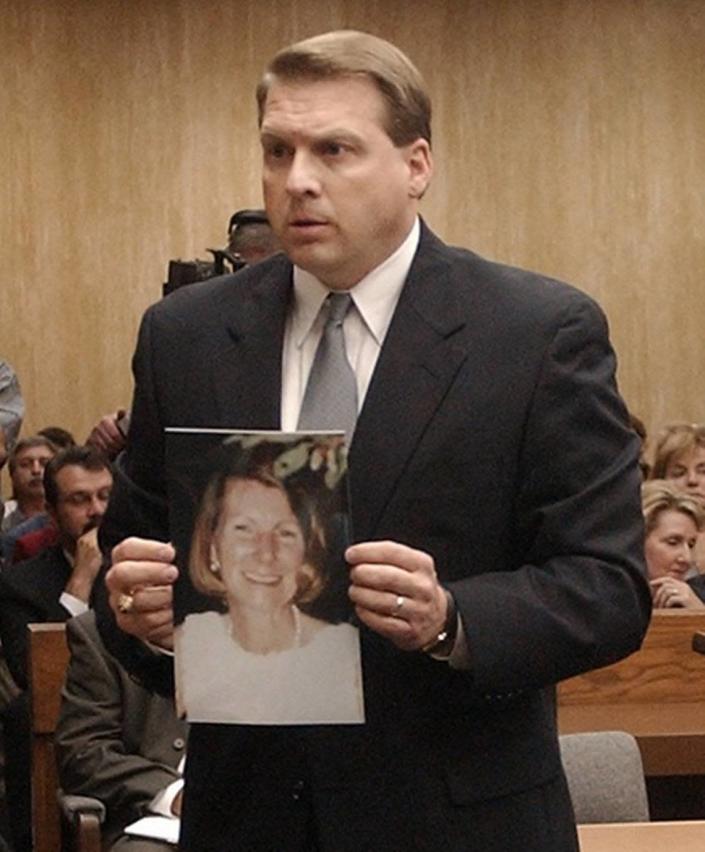 Kathleen Hunt Peterson and Dennis Wayne Rowe grew up in the same neighborhood in Lancaster, Pennsylvania, and they both died violent deaths in Durham.

Rowe makes a guest appearance in the HBO Max series “The Staircase,” a dramatization of the Netflix documentary that explores Kathleen’s 2001 death at the bottom of bloody stairs, her husband Michael Peterson’s 2003 trial and sentencing, and her exit from jail in 2011.

Rowe appears in the scripted series not only as an old friend of Kathleen and her sister, Lori Campbell, but as one of Michael Peterson’s unnamed lovers.

The HBO series adds at least one more twist – one that may or may not be true.

The new twist says Rowe told prosecutors about the dates he and Lacour had with Peterson. What isn’t shown in the series (at least not in the first five episodes made available to some members of the media prior to the show’s release) is that four years later, Lacour killed Rowe . He allegedly stabbed and beat him, wrapped his head in duct tape and left the 42-year-old’s body stuffed in a bin.

Kathleen Hunt Peterson was born in Greensboro but grew up in a southeastern Pennsylvania town where she was voted “girl of the year” and “Lancaster lass” as a young girl, according to her obituary.

She went on to serve as president of the debate club, editor of the school magazine and number one student in her senior class in high school, according to her obituary.

Rowe and her three brothers lived a few houses away from Kathleen Peterson and her two sisters, neighbors told The News & Observer in 2004.

Peterson, then Kathleen Hunt, first left Lancaster to attend Duke University, where she received a master’s degree in mechanical engineering in 1975, according to her obituary. She then held senior positions at Merck and Nortel Networks, where she worked as an executive when she died.

Rowe followed after graduating from high school in 1979. He graduated from Duke in 1982 with a degree in English, according to his obituary.

Rowe worked at the Duke Medical Center Library and designed elaborate formal dresses and high-end throw pillows, which were marketed in stores across the country by H. Coulston Designs, Rowe’s obituary states.

He was working in technical support for the U.S. Postal Service in Raleigh when he was killed in 2004.

What HBO’s ‘The Staircase’ Says About Rowe

In Episode 3 of the HBO series, a detective identifies Rowe after District Attorney Jim Hardin says the link between emails Peterson sent to a male escort and Kathleen’s death months later was “a little fuzzy” for a pattern.

Durham detective Art Holland then visited an adult video store, a gym and a bar before someone said something about Rowe mentioning Michael Peterson, according to the scripted show.

In another scene, Rowe told Hardin that he had anonymous sex with Peterson at a sex shop and at the Forest Hills YMCA.

When prosecutors asked if Rowe knew anyone else who had sex with Peterson, Rowe mentioned Lacour.

Rowe told Hardin he was not friends with Lacour, but “we are a small community”.

Rowe told Hardin on the show who mentioned Peterson to Lacour after a campaign event where Michael Peterson’s name was discovered. He said Lacour looked at Peterson and thought he looked familiar.

The series then shows a scene with Holland talking to Lacour.

Lacour denied the connection to Peterson, using an insult to indicate that he is not gay.

Holland declined to comment for this story. Hardin did not respond to phone messages.

Rowe doesn’t end up testifying, the HBO show portrays, after handing over a list of “prominent married men” he had slept with in Durham, some of whom were Hardin’s donors.

Hardin has expressed reluctance to bring innocent people out on the stand.

“I don’t see it going well for us,” he told Freda Black, his co-lawyer, on the show.

“I know you gave them my name, Dennis,” Lacour said. “I’ll do you like this Peterson (expletive). You hear me? You shut your mouth. Close.”

What we know about Rowe’s death

Rowe was found dead at his home on Maynard Avenue in Durham, in a rubbish bin in November 2004 – around a year after the Peterson trial.

It was upside down and tied with tape, The News & Observer reported. He was beaten, stabbed and his hands were tied behind him, WRAL reported.

Rowe left work sick around noon on November 22, 2004, a Postal Service official told The News & Observer at the time.

The next day, a friend who visited Rowe at his home found his body. Blood was splattered on the ceiling, according to The Herald-Sun.

Lacour fled and was not arrested until he was found in Virginia in October 2006.

In January 2009, Lacour pleaded guilty to second degree murder. Lacour was released from prison in June 2020 after serving nearly 16 years for killing Rowe.

Three years before Rowe’s death, Lacour was also a suspect in the 2001 murder of his roommate in Person County, WRAL reported.

Lacour told authorities the roommate committed suicide after setting himself on fire, but Lacour was charged with murder until the case was finally dismissed in January 2003.

The then Person County Sheriff said he believed Lacour got away with a murder, The Herald-Sun reported.

In December 2021, Lacour was charged with two counts of second-degree forcible sexual offense in Orange County, according to court documents. His address was on the streets of Chapel Hill.

Read more about HBO’s “The Staircase”

For full coverage of HBO Max’s “The Staircase” and other information on the death of Kathleen Peterson and the murder trial of Michael Peterson, visit: newsobserver.com/topics/staircase