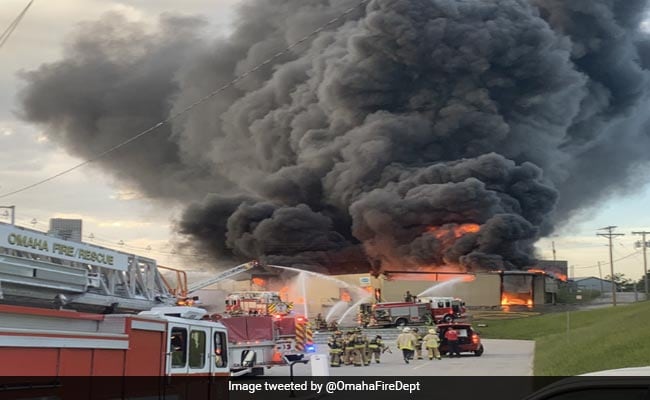 A huge fire explosion at a chemical plant in Omaha, Nebraska.

Residents of Omaha, Nebraska in the United States were told to evacuate their homes by authorities as a massive fire broke out at a chemical plant. The blaze, which started on Monday evening, has been classified as a three-alarm fire, illustrating its spread and severity.

The Omaha Fire Department shared a photo of the fire on Twitter on Tuesday. “3rd alarm fire at 1415 S 20th St. Fire active, please stay clear of area. We still have units responding,” he said in the caption.

“Media at third fire alarm, please report to the north side of the 1415 S 20th St address by the OPD office blocking traffic on 20th Street just before the railroad bridge. We’ll have a quick press conference in 10 minutes at 8:07 p.m.,” the fire department added.

The cause of the fire is not yet known. When firefighters realized there were likely propane tanks and combustible chemicals in the plant, they immediately moved away from the flames.

“Due to the explosions and smoke from the fire,” city fire battalion chief Scott Fitzpatrick told TAUT, “anyone residing between South 13th and South 20th streets, as well as streets Leavenworth and Martha should evacuate.”

According to Pottawattamie County Emergency Management, an agency involved in coordination, collaboration and integrated support services, the smoke billowing from the chemical plant caused no health threat.

From downtown Omaha, thick black smoke and intense flames could be seen for miles around. Hundreds of people gathered on rooftops, porches and sidewalks to watch and record the fire. At 8:15 a.m. Tuesday, several massive explosions were recorded, with debris flying from the building prompting police to block people from entering the area, the Omaha World Herald reported.

Residents who live near the city center have been asked to stay at home.