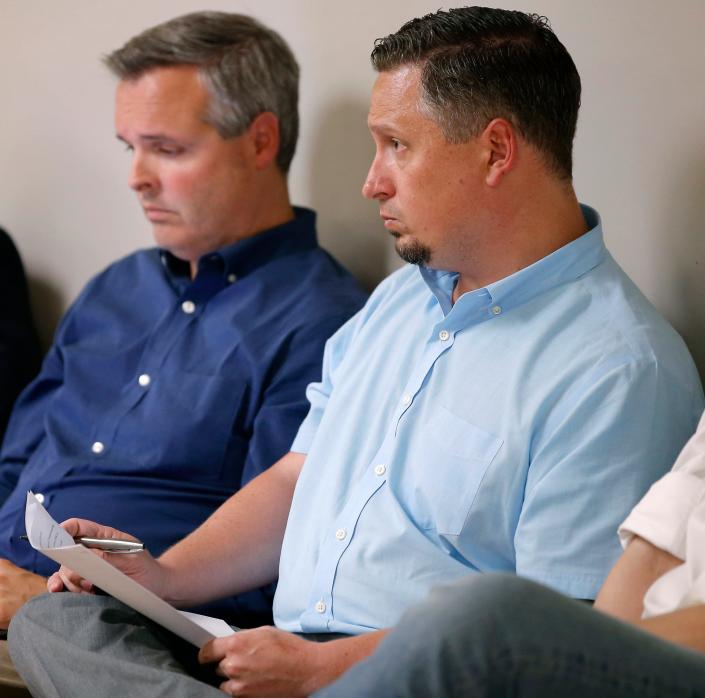 The co-founders of Epic Charter Schools have been arrested for financial crimes, the Oklahoma State Bureau of Investigation has announced.

Ben Harris, David Chaney and their company’s chief financial officer, Josh Brock, were arrested at 10 a.m. Thursday, OBSI said. They were incarcerated in the Oklahoma County Jail on $250,000 bond.

Harris, Chaney and Brock were arrested for embezzlement of public funds, racketeering, obtaining money under false pretenses, conspiracy to commit a crime, violations of the state’s Computer Crimes Act, submission of false documents to the state and illegal products.

“We deny any wrongdoing,” said Mack Martin, an attorney representing Brock. “We haven’t seen any charges.”

Harris and Chaney’s legal counsel could not be reached Thursday afternoon.

The charges stem from a nine-year investigation into the defendants’ handling of Epic Charter Schools, a public system of virtual charter schools.

In addition to creating Epic, Harris, 46, and Chaney, 43, founded a private company that ran the school system and earned 10% of its annual education funding.

Epic severed all ties with the co-founders, Brock and their company in May 2021.

“This has been a very complex and arduous investigation with many roadblocks delaying the discovery of the truth,” OBSI Director Ricky Adams said in a statement. “Harris, Chaney, and Brock proposed a ‘get-rich-quick scheme’ that lined their pockets with taxpayer dollars that were to be spent to benefit Oklahoma students. »

Oklahoma County District Attorney David Prater is assigned to file the charges in the district court.

Several Epic principals and state education officials were attending an Oklahoma State Board of Education meeting at the time of the arrests.

Epic officials were responding to a scathing investigative report from the Oklahoma State Department of Education, which alleged on Tuesday that the school system had deep flaws in its attendance policies and its governance.

The state’s four-hour board meeting came to a swift end Thursday afternoon as news of OBSI’s announcement spread throughout the room.

Epic Superintendent Bart Banfield said the timing of the arrests was “certainly a surprise”.

“I don’t know how to describe it,” Banfield said. “I wish I could put words to how I feel today, but there are mixed emotions about it because we worked with them. They founded our school. They ran the school for a good part of the decade. So they’ll have their day in court. It’ll be up to a judge and jury to decide.

This is a developing story.

Journalist Nuria Martinez-Keel covers K-12 and higher education statewide in Oklahoma. Do you have a story idea for Nuria? She can be reached at [email protected] or on Twitter at @NuriaMKeel. Support the work of Nuria and other Oklahoman journalists by purchasing a digital subscription today at subscribe.oklahoman.com.