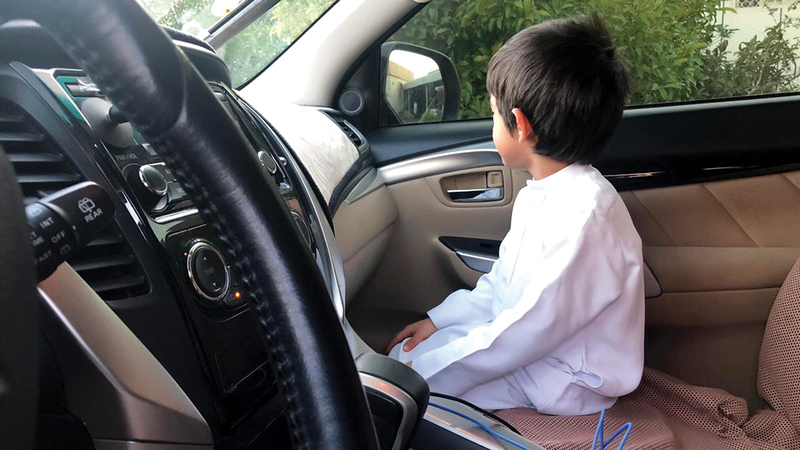 Abu Dhabi Police revealed that they violated 180 drivers in the Emirate of Abu Dhabi, during the first half of this year, for allowing children to sit in the front seat of the vehicle.

She confirmed to “Emirates Today”, the seriousness of this behavior, warning parents against endangering the lives of their children (who are aged or less than 10 years, or whose height is less than 145 cm) while they are inside the vehicles, as this exposes them to legal accountability, including non-compliance with the procedures Regulatory regulations set for children to sit in the seats designated for them, and to ensure their safety inside the vehicle.

She pointed out that the Law of Vehicle Seizure in the Emirate of Abu Dhabi stipulates a violation of allowing a child under the age of 10 to sit in the front seat of the vehicle, with a fine of 400 dirhams, and 5000 dirhams for unlocking the vehicle, provided that the vehicle is impounded until the payment of the financial value for a maximum period of three months. In the event of non-payment of the dues, the vehicle shall be referred for sale in a public auction.

The penalty stipulated in the Federal Traffic and Traffic Law, which is a fine of 400 dirhams, is also applied in the event that a child from the age of 10 and under or someone whose height is less than 145 cm is allowed to sit in the front seat of the vehicle.

The Federal Traffic Law also stipulated a violation of not providing protection seats for children aged four years and under while they were in the vehicle, with a fine of 400 dirhams.

Police reports indicate that many children have been exposed to road accidents at the state level, resulting in injuries and deaths, due to their failure to sit in the seats designated for them, and the failure of their parents to adhere to safety and security measures, as well as some mothers carrying their infants in the front seats.

Abu Dhabi Police stressed the importance of having child seats inside vehicles to reduce the risk of accidents, and the resulting injuries and deaths, warning families of the dangers of children under the age of 10 riding in the front seats, as some do not realize the importance of these seats, which puts the lives of their children at risk when they occur. Any collision causes the child’s body to rush forward to hit the interior parts of the vehicle, and it may rush out of it in the event of a severe collision or overturning.

And regarding the fact that some parents put children in their arms while driving the vehicle, Abu Dhabi Police warned against this behavior because it poses a great danger to their safety, and to avoid traffic accidents.

Children under the age of 10 must use safety seats with internal belts until they are 145 centimeters tall, and when the child reaches this age, he can use the seat belt.

Abu Dhabi Police confirmed its continuous interest in spreading traffic culture with preventive requirements and safe seating for children in vehicles, and urging drivers to use child seats to protect them from injuries in traffic accidents.

A measure that reduces the risk of accidents for children

The Ministry of Interior has warned that some parents are not obligated to sit their children in their designated seats inside vehicles while driving.

And she confirmed, according to studies, that adhering to this procedure reduces the risk of accidents for children, and the resulting injuries and deaths, by 54%, and by 71% for newborns.

She also confirmed that the safe seat of children is a major factor in providing them with safety, as well as increasing the driver’s concentration on the road, noting that the accident takes only three seconds when the driver’s attention is diverted from the road.

She explained that children, if they do not sit in their assigned seats and fasten their seat belts, cause distraction for drivers, and increase movement and play inside the vehicle, which puts them at risk in the event of a collision or sudden stop.

The Abu Dhabi Vehicle Seizure Law stipulates the violation of “allowing a child to sit in the front seat” with a fine of 400 dirhams, and 5,000 dirhams for unlocking the vehicle.