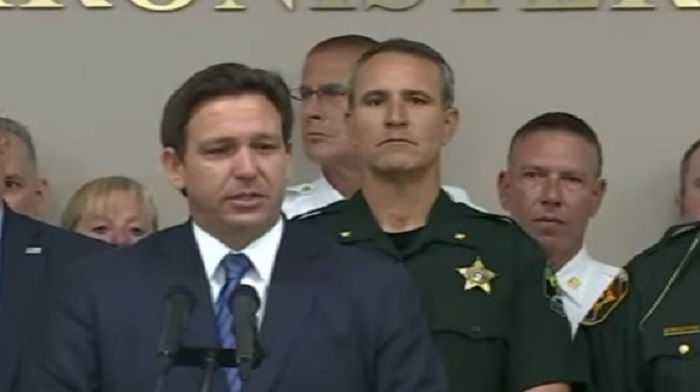 “We are suspending Soros-backed state attorney Andrew Warren from the 13th Circuit for neglecting his duties as he vows not to enforce the laws of the state,” DeSantis’s office said in a statement.

Calling the Florida Constitution to give him the right to suspend the state attorney, the governor added, “We will not allow this pathogen of ignoring the law to gain a foothold in the state of Florida. “

DeSantis alleges that Warren signed letters stating that he “would not enforce any laws regarding the protection of the right to life in the State of Florida.”

RELATED: DeSantis Responds To Invitation From ‘The View’ With List Of Clips Where Hosts Call Him ‘Fascist, Bigot’

DeSantis Suspends Prosecutor Because He Believes He Is Above The Law

Aside from not enforcing laws related to abortion restrictions in the Sunshine State, the left-wing state attorney would turn a blind eye to those related to gender surgery.

“In June 2021, [Warren] signed a letter stating that he would not enforce a ban on gender reassignment surgery for minors,” DeSantis accused.

In Florida, we will not allow the pathogen of ignoring the law to gain a foothold in our state.

You take an oath to enforce ALL the laws of our state, not just the ones you like. Otherwise, find a new job.

The Daily Mail reports that Warren “also refused to prosecute 67 Black Lives Matter activists arrested in June 2020 at a protest in Tampa that turned violent over anger over the police killing of George Floyd in Minneapolis.”

“The state attorney for this judicial circuit, Andrew Warren, has publicly put himself above the law,” DeSantis said.

Progressive prosecutors, backed by Soros, have refused to enforce laws across the country. They treat criminals with respect and victims with contempt. This dereliction of duty is the reason why crime is on the rise. But @GovRonDeSantis will not stand for this. He just suspended the one in Florida.

RELATED: DeSantis Gets a Standing Ovation for Destroying the Media

Warren responded to his suspension by calling the move a “political stunt” and suggesting that his popular election gives him the right to choose which laws he enforces.

“Today’s political stunt is an illegal overdraft that continues a dangerous pattern of Ron DeSantis using his office to further his own political ambition,” he said in a statement.

“It spits in the face of the Hillsborough County voters who twice elected me to serve them, not Ron DeSantis.”

Prosecutors are not chosen to decide which laws to enforce. https://t.co/c1aZrscMGY

Pushaw noted prior to the announcement that the following move by Governor DeSantis: would certainly lead to “the liberal media meltdown of the year.”

DeSantis: “We took it seriously, we did a thorough evaluation and pulled the trigger today.” pic.twitter.com/qThMgltHGA

And the meltdown came to fruition.

“American Nazism,” he tweeted. “Germans who opposed Hitler were also considered the enemy.”

Schneider’s parents must immediately attend the high school or college he attended and demand that their tuition or tax dollars be refunded immediately. Their son is an example of the failing education system, and he doesn’t even try to hide it.

Germans who opposed Hitler were also considered the enemy.@GovRonDeSantis follows in the footsteps of every fascist regime throughout history. https://t.co/SkmYa1EQjV

Others were always a little less on the nose with their criticisms, but you could feel them still melting inside.

Desantis has turned the FL legislature into an irrelevant stamp politburo through threats and intimidation. He has also done this for the state university system, school boards, public health agencies and hospitals. Now he’s going after the prosecutors. This man is an autocrat.

An elected Florida prosecutor is not involved in DeSantis’ culture war, so the GOP governor replaces him with someone else.

The closer you look at this, the harder it is to defend. https://t.co/mVvCoKDwJC

He is destroying the will of the Hillsborough County voters.

BREAKING: MAGA Governor Ron DeSantis suspends County State Attorney Andrew Warren, a Democrat, for boldly refusing to enforce draconian bans on abortion and transgender surgery, alleging he had “dereliction of duty.” RT TO BE GRATEFUL THANKFUL FOR THE POSITION!

“Ron DeSantis is such a dope. He didn’t even wait for action to be taken, and he’s doing the same thing as these freaks, insurgents and lunatics,” said MSNBC’s resident dope.

“When George Floyd’s Riots Happened” [public health experts] said…we don’t believe riots are bad for covid. It’s so important that you should do it. But if you’re protesting lockdowns… then you can’t. And then I knew that these people are a bunch of scammers.” pic.twitter.com/2ls8NRgZ9T

He accused Soros-funded lawyers of trying to “change the criminal justice system through non-enforcement,” something we all saw during the 2020 race riots.

You can’t have prosecutors declaring that they won’t enforce the law – that’s what’s happening in New York and Chicago.

The great thing about Florida is that we have a governor who takes bold action to make sure this doesn’t happen in our state.

Carlson pointed out that despite all the talk about the end of democracy in this country, DeSantis was just making an effort to protect it.

“When a prosecutor decides which laws are valid and which are not, that is the most fundamental undermining of democracy and Andrew Warren has done that for six years,” he said.

DeSantis appointed Hillsborough County Court Judge Susan Lopez to replace Warren while his office works to have him replaced permanently.

Now is the time to support and share the resources you trust.
TAUT ranks third in Feedspot’s “100 Best Political Blogs and Websites.”