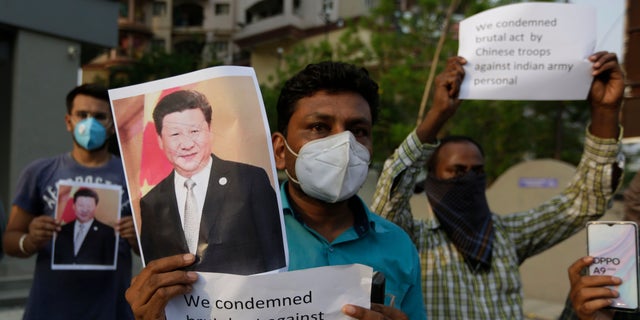 Two years ago, Chinese soldiers crawled through the high-altitude Galwan Valley in freezing temperatures and under cover of darkness. Armed with homemade weapons, including iron bars studded with nails and wooden clubs wrapped with barbed wire, they attacked a contingent of Indian soldiers. The medieval hand-to-hand combat lasted six hours.

A man holds a photo of Chinese President Xi Jinping during a protest in Ahmedabad, India, June 16, 2020, after Indian soldiers were killed in a deadly border clash with Chinese troops. (TAUT Photo/Ajit Solanki)

If both sides had not respected the decades-long agreement banning the use of firearms along the disputed border area, known as the Line of Actual Control, the outcome — both on the battlefield and on the global stage — could have been much worse.

In the wake of the attack, New Delhi issued a series of reprisals, including banning Chinese apps from the Indian app store. With India rapidly approaching 1 billion smartphone users, it was a major blow to the Chinese tech community. It also served as a smart move on national security, as it undermined China’s ability to mine Indian citizens’ personal and biometric data.

The United States, for its part, was quick to find a means by which to bolster its growing security partnership with India — not through fighter jets and missile systems, but rather by offering a wide range of cold-weather equipment, enabling it to Indian army to “winter” in the Galwan Valley, hindering future attempts by Beijing to undisputedly violate and conquer Indian sovereign territory.

Indians burn photos of Chinese President Xi Jinping during a protest against the Chinese government in Jammu, India, June 2020. (TAUT)

When I researched my thriller “Rising Tiger”, I was shocked not only by the ferocity of the attack on the Galwan Valley, but also by China’s continued attempts to slip a proverbial noose around India’s neck through its salami. cutting, territorial incursions into Bhutan, expanding its sphere of influence through its Belt and Road initiative in Pakistan, and its network of commercial and military facilities in the Indian Ocean known as the String of Pearls.

India, as the world’s largest democracy, is a natural ally of the United States, the world’s oldest. From our supply chain (which is far too reliant on China) to military cooperation, there’s a lot America could benefit from a formal alliance with India.

In fact, as China’s economic and military expansionism continues to grow, now is the time to move beyond the four-way security dialogue of Australia, India, Japan and the United States to a more robust, official organization.

See also  I went to a 5 star resort on vacation and it was filthy - the pool was full of dirt?

Beijing’s ambitions are clear to everyone. We must invest our time and our gold accordingly. As the Indian proverb says, “Life is not a continuum of pleasant choices, but of inevitable problems that require strength, determination and hard work.” It is high time we act as a nation.

Brad Thor is the No. 1 New York Times bestselling author of 22 thrillers, including his latest, ‘Rising Tiger’.