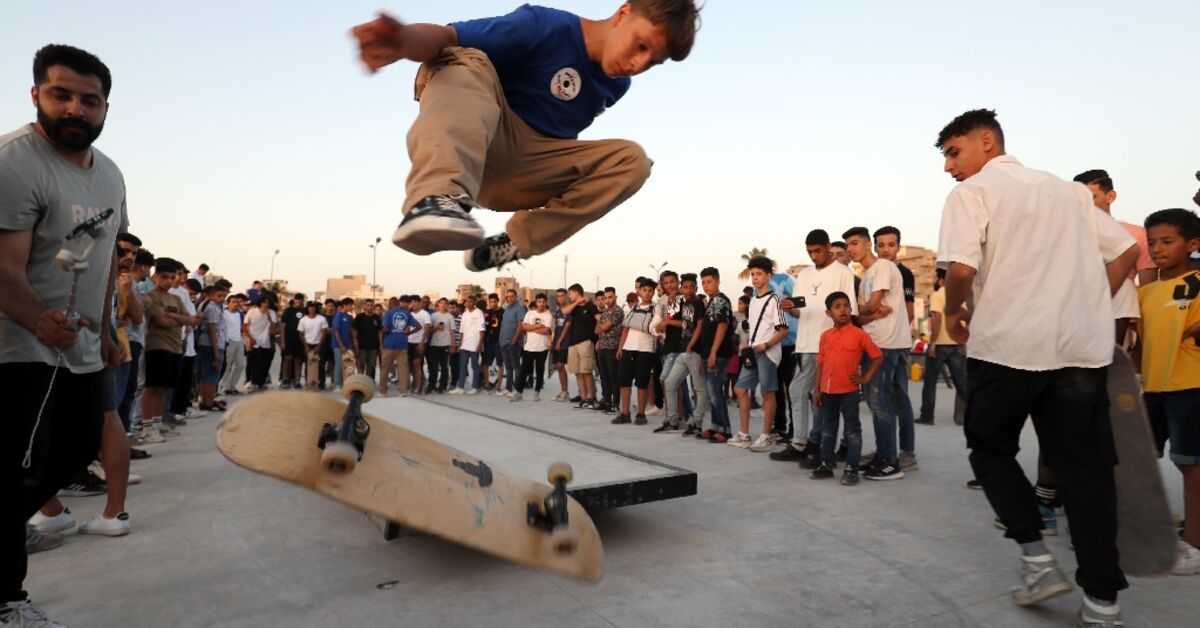 Libyan Mohamed Abderraouf has put a foot on his board and hit Tripoli’s first skatepark, a welcome break from the conflict-ridden capital with few facilities for bored youngsters.

“I can’t describe the joy,” said the 18-year-old, who bought his first skateboard in 2020 and had only been able to practice on street corners – until now. “I will come a few times a week.”

The free outdoor facility opened in central Tripoli this weekend, much to the delight of young skaters who spent the afternoon sweeping the halfpipes and taking selfies with their friends.

“I’m really happy, because before there was no dedicated place for skating,” said Rayan al-Omar, 18, who has been skating for a year.

The US-funded facility was built by Make Life Skate Life, a charity that has set up “free, community-built concrete skateparks” in Iraq, Bolivia and India.

Australian Wade Trevean, who designed the 800 square meter Tripoli venue, said volunteers came from far and wide to help build it, a process that took around six weeks.

“There are people from New York, people from Belgium, Germany or Australia,” Trevean said. “The happiness and positivity here is amazing.”

– Built on the basis of Gaddafi’s bodyguards –

Local skaters have also played a role in the project, which is part of a seaside park that also includes a cycle path and five-a-side football pitches.

The rest of the complex was completed a year ago on the site of a former base for the ‘Amazons’, the entourage of ousted dictator Muammar Gaddafi’s female bodyguards, and seen as a symbol of the tyrant’s extravagance .

Since being overthrown and killed in a 2011 revolt, Tripoli has suffered successive waves of violence, meaning few resources have been invested in leisure and cultural facilities – already almost non-existent under Gaddafi.

So nearly two years after the guns fell silent following the last major battle on the outskirts of the capital, the opening of a skatepark in Tripoli has garnered a lot of attention.

For young Libyan skateboarders, interest in the sport reflects a desire for normality, to be like other nations and other young people.

Abderraouf said such a project would have been “unimaginable” until recently.

For Make Life Skate Life, the “overall goal” of the skatepark is “to create a safe community space where people from different backgrounds can come together and interact positively in a fun way,” the organization said.

“In addition to creating immediate local jobs, the skatepark aims to contribute to a healthier, more active, more engaged and happier society,” he added.

The group says it will run free weekly skate lessons for 60 girls and boys – split evenly – who otherwise couldn’t skate, with boards and safety gear available.

Trevean extolled the virtues of skateparks for building community.

“I know the benefits of skateparks and I really believe in them.”