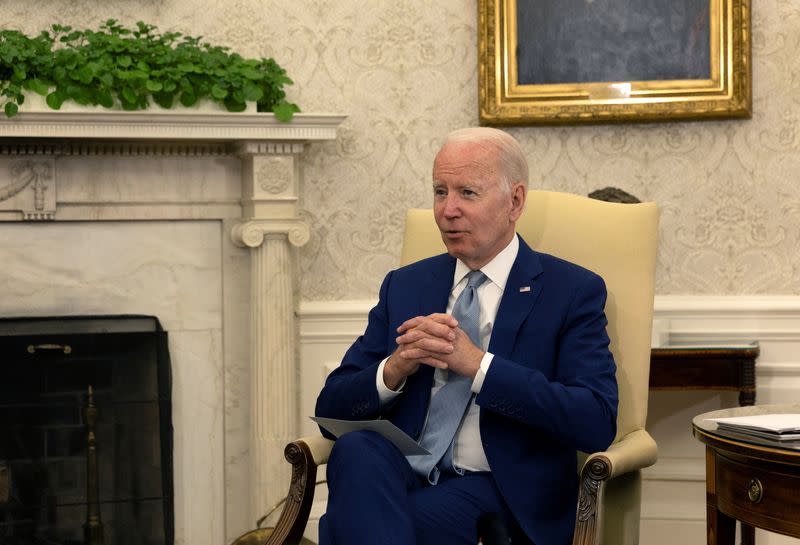 By Trevor Hunnicutt and Howard Schneider

WASHINGTON (Reuters) – President Joe Biden is planning a media blitz to boost his dwindling opinion poll numbers ahead of the November congressional election, promoting his handling of America’s recovery from the coronavirus pandemic and his efforts to cool the spiral of inflation.

Biden’s meeting with Federal Reserve Chairman Jerome Powell to discuss inflation on Tuesday was the first event of a weeks-long schedule, a White House official said.

Through June, the official said, the White House plans to highlight historic levels of job creation and low unemployment seen in Biden’s first 17 months in office, his commitment to respecting the independence of the Fed and the upcoming efforts to “put more money in the pockets”. of working-class families. »

The prospects for Biden’s Democratic Party retaining control of Congress in the Nov. 8 election could hinge on how well it manages to craft a positive economic narrative around what has become an increasingly bitter mood.

On the surface, working families are doing well.

Unemployment is at levels closer to the boom years of the 1950s and 1960s, wages for many low-skilled occupations are rising, and bank accounts, on average, are still teeming with cash from coronavirus support programs. Recent Fed reports and surveys have reported that households on average are in a solid financial position.

But confidence has declined and, in a recent Reuters/Ipsos poll, the economy topped the list of respondents’ concerns. Biden’s approval rating fell to 36%, the lowest of his presidency.

Inflation has hit a 40-year high, persisted longer than policymakers expected when it first rose last year, and in recent months has prompted the Fed to trigger what could come next. prove to be one of his fastest efforts to tighten monetary policy.

The opposition Republican Party, embroiled in a civil war over former President Donald Trump’s 2020 election lies, has united to hammer Biden on inflation.

“What Democrats need to do is resist the urge to explain how inflation was caused and go all out on the genre, here’s what we’re going to do about it,” said Rodd McLeod, a Democratic political consultant in Arizona, a state that can swing to either major party.

Responses to a comment Biden wrote about his inflation-fighting plans in The Wall Street Journal on Tuesday underscored the scale of the challenge he faces.

By midday, the vast majority of more than 1,000 comments in one of the country’s few national newspapers rejected the prescription drug pricing and clean tax credit plans Biden had presented, while advocating instead lower taxes and more oil drilling and dismissing Biden’s ideas as fiction.

Bringing inflation under control will require not only shrewd central bank decision-making, but also a bit of luck. Global prices are rocked by events such as the war in Ukraine and the coronavirus pandemic, and whether another surge could once again dampen manufacturing in China.

The best case for Biden at home is that the Fed’s monetary policy tightening slows the economy just enough for spending to cool and businesses to cut job openings without actually cutting jobs.

The alternative, if the Fed finds inflation more persistent, is for the central bank to raise interest rates so high that the economy tips into recession with a significant increase in unemployment. September should be a pivotal month, as the Fed needs to take stock and decide to become even more aggressive.