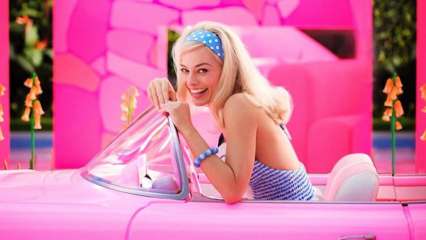 The 31-year-old Australian actress was spotted leaving her trailer decked out in bright pink flared trousers and a matching halterneck vest, her long blonde hair falling to her shoulders.

Check out the photos here:

no words for margot robbie like barbie pic.twitter.com/wBwfMqOkZB(@safemargot) June 22, 2022

A few days ago, Ryan Gosling’s look blew up the internet as soon as it was released.

In the photo, Ryan is seen sporting platinum blonde hair with washboard abs while wearing a matching denim ensemble. Fans went wild after seeing the photo and have been showering compliments ever since.

Barbie is an upcoming romantic comedy based on the fashion doll of the same name. Actress-filmmaker Greta Gerwig is directing it. She is also co-writer of the film with her filmmaker partner Noah Baumbach. Besides Margot Robbie and Ryan Gosling, the film will star Kate McKinnon, Alexandra Shipp, America Ferrera, Simu Liu, Hari Nef, Will Ferrell, Issa Rae, and Michael Cera. Produced by Warner Bros, the film will hit theaters in July 2023. The film will collide with Christopher Nolan’s “Oppenheimer” starring Cillian Murphy and Robert Downey Jr. in the lead roles.

According to Kyle Buchanan of The New York Times Barbie will feature several Kens and Barbies. It seems like everyone has a role in the film, including Kate McKinnon, Issa Rae, Simu Liu, Sex Education star Emma Mackey, Michael Cera and Will Ferrell. Warner Bros. plans to release the film in Summer 2023 reports per Variety. The film was originally to be produced by Sony and had “a fish-out-of-water story at La Splah and Big, where Barbie is kicked out of Barbieland for not being perfect enough, a bit eccentric and not does not fit.