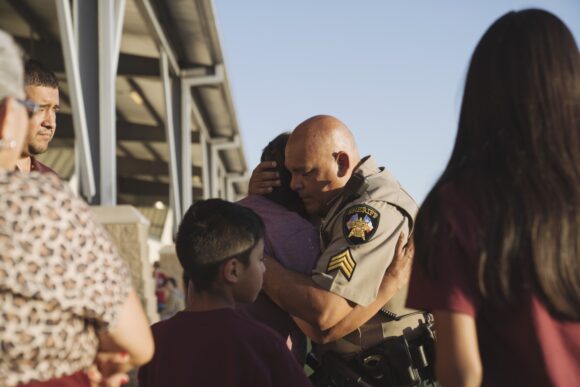 Texas police accused of bungling the response to a mass shooter at a Uvalde school where 19 children and two teachers were killed are unlikely to be held accountable in civil court, given broad immunity granted to government entities.

The law enforcement response is under scrutiny. According to the schedule provided by Steven McCraw, director of the Texas Department of Public Safety, 19 officers were in the school for nearly an hour before police entered the classroom where the shooter was and stopped. kill him. The students had called 911, pleading for help as the shooter was still active.

“I certainly think the activity or inactivity of the police was horrible, but I don’t think there’s any recourse to prosecute the police,” said David Crump, a law professor at the University of Houston, in an interview. Frida

According to the doctrine of sovereign immunity, a government is not liable to its citizens for their injuries. The Texas Torts Claims Act allows lawsuits in certain limited circumstances, but according to the legal experts interviewed, those would not apply in the Uvalde school shooting case.

“The police were doing what the police do,” Dick DeGuerin, a criminal defense attorney in Houston, said in an interview. “They may have been terribly negligent in the way they did it. But it must be more than negligence, it must be a fault of the police” for the civil liability to remain before the courts.

“Unless Uvalde’s police chief has a written policy that says, ‘Wait one hour before entering and rescuing children,'” Cogdell said.

Neither Uvalde police nor McCraw responded to requests for comment, made after regular business hours.

Cities have settled cases where individual police officers have been accused of wrongdoing. Minneapolis has paid $27 million to settle a civil lawsuit brought by the family of George Floyd, who choked to death when an officer knelt on his neck. Floyd’s killing has fueled nationwide Black Lives Matter protests.

According to the Washington Post, more than $3.2 billion has been spent over the past decade to settle allegations of police misconduct at 25 of the nation’s largest police and sheriff’s departments.

“Civil rights law requires an almost intentional deprivation of civil rights, which I think is unlikely due to police inaction” in Uvalde, Crump said.

There, the incident commander, the school district’s police chief, made the decision not to attempt to break into the classroom where the shooter was barricaded because it was believed that no children were in danger at that time, McCraw said at a press conference. Friday.

The incident commander then made the decision to wait for other tactical officers to arrive before attempting to enter the room to confront the shooter. Officers entered after obtaining a key from the concierge, he said.

“Obviously there were children in the room, they were clearly at risk,” McCraw said. “It was the wrong decision.”

Having the Texas DPS call out local police mistakes likely creates accountability for them, DeGuerin said. But that’s something to be expected, he added.

“Everyone is pointing fingers at each other, trying to blame anyone and everyone but the culture,” he said, referring to gun culture. “That’s where the blame lies.”

Cogdell said there are no state or federal laws that currently place liability on local cops, other first responders or local government officials in a mass shooting situation.

“They are literally going to have to change the law; the Texas Legislature or Congress is going to have to get involved” and create wrongful death laws that address these situations, he said. “They won’t be able to write around it just because we’re looking at a more sympathetic situation here.”

Photo: A resident hugs a sheriff after a vigil for victims of the Robb Elementary School shooting in Uvalde, Texas on Wednesday, May 25. President Joe Biden has mourned the killing of at least 19 children and two teachers in a mass shooting at a Texas primary. school on Tuesday, decrying their deaths as a senseless and demanding action in an attempt to curb the violence.